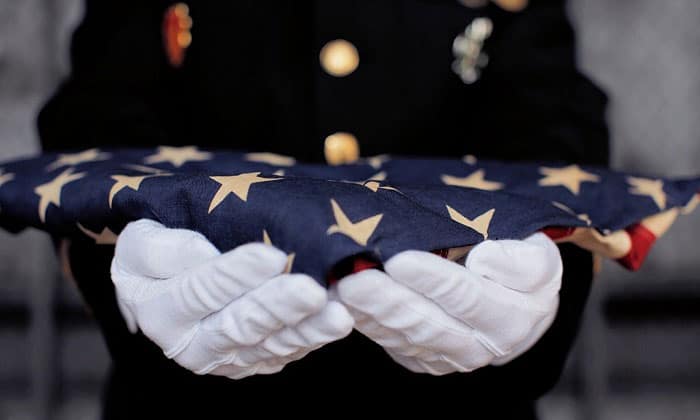 The U.S flag is a very important symbol of freedom and pride for all Americans. It has a meaningful role in many ceremonies, like burials and funerals. It is a custom in the U.S Army and Navy to lower the flag at the last note of retreat every day and fold it.

In addition, casket flag folding is a ceremonial tribute to a veteran and his or her family. In any case, the flag is folded 13 times into a tri-cornered shape. You can learn more about how to fold a military flag in this article. Read on! 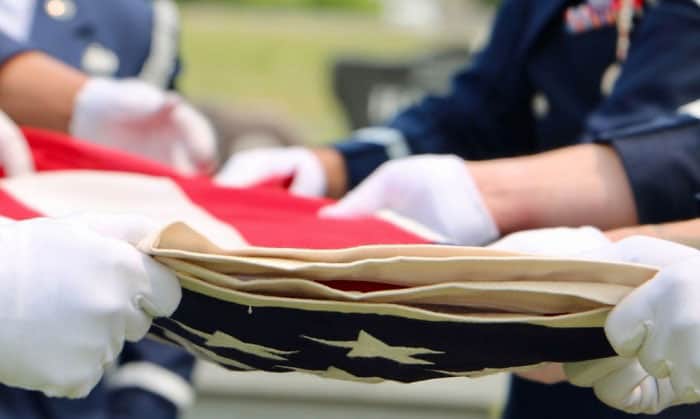 As mentioned, proper military flag folding includes 13 folds. The final result is a shape that resembles the tri-cornered hat of the Patriots from the American Revolution.

You cannot fold a flag by yourself. There needs to be at least one other person folding with you. Most flag folding ceremonies will have 6-8 “folders”.

What You Will Need to Do

The proper way to fold the flag is as follows:

The general flag presentation protocol involves the flag recipient and flag holder. The latter holds the folded flag at waist height and positions the straight edge to face the former. Then, the flag is leaned towards the recipient and solemnly presented.

Note: There will usually also be an accompanying verbiage and/or flag reading script. 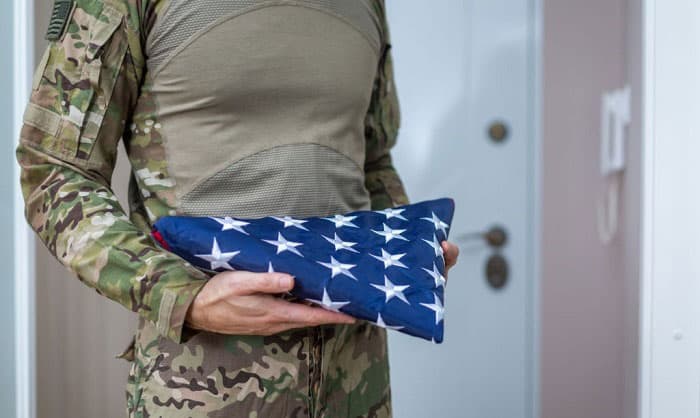 This next section will show you how to fold the American flag to fit it into a memorial display case.

What You Will Need to Do:

Aside from the above steps to fold an American flag, you should be aware of the meanings behind each of the 13 folds. This next section is dedicated to outlining that.

As you can see, the flag folds represent the same religious principles that the U.S was founded on. Some sources also say that the 13 folds refer to the first 13 colonies prior to Independence: Connecticut, Delaware, Georgia, Maryland, Massachusetts, New Hampshire, New Jersey, New York, North Carolina, Pennsylvania, Rhode Island, South Carolina, and Virginia.

The origin and date of the source for the flag folding procedure is unclear. Some credit an Air Force chaplain at the U.S Air Force Academy, while others believe it was the Gold Star Mothers of America.

At the last retreat ceremony, the national flag is lowered, folded into a triangle, and kept under close watch through the night. This procedure is a tribute to the nation’s honored deceased. The next day, it is taken out and flown again at the ceremony of reveille to symbolize the resurrection of the body.

The field of blue dresses from left to right and is inverted over the casket. This is a token to thank the deceased veteran who has served the country honorably.

Knowing how to fold a military flag is important even if there are not a lot of personal occasions for you to do it. You also know other relevant information about the associated meanings of folding a flag, which may come in handy later in life.

Who knows, maybe you will be able to boast about knowing what the 13 folds in flag protocol are. Plus, you can better appreciate and respect the flag and what it stands for. Also, do not hesitate to leave comments or share this article with other readers!