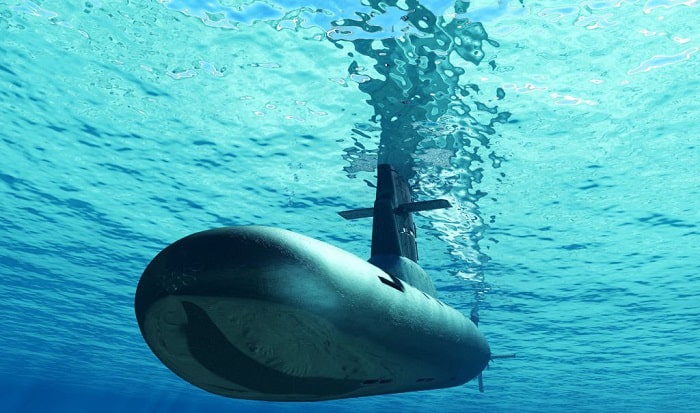 Submarines are vehicles made to go deep underwater. The military, specifically the Navy, uses them to do various things. As such, there are several different types (or the right jargon: classes) of submarines. They are Los Angeles class, Ohio class, Seawolf class, and Virginia class submarines. How deep can a military submarine go? In general, they can go over 600 feet below the surface of the ocean. But for more details, continue reading.

How Far Down Can a Submarine Go?

As mentioned earlier, submarines can go more than 600 feet below the surface of the ocean. The specifics depend on the type or class of submarines, though.

According to Wikipedia, the U.S Navy currently operates Los Angeles class, Ohio class, Seawolf class, and Virginia class submarines. Each is characterized by a different max dive depth. Let’s explore them below, starting with the Los Angeles class.

These are fast attack submarines, often abbreviated as SSN. They were first built in 1972 and about 20 still remain in service today.

Los Angeles class submarines are equipped with various weapon systems, including torpedo tube-launch weapons, mines, and missiles. They also have advanced trackers and sensors, making up the control suite and overall program.

These submarines are powered by S6G nuclear reactors and steam turbines. They also have an additional propulsion motor that operates at 325 hp or 242 kW.

As publicly disclosed, the max speed is more than 25 knots or 46 kilometers an hour (29 mph), while the max depth is 650 feet or 200 meters, though it is generally believed that the real values for both the speed and depth are classified for security reasons.

Here is a photo of a fast attack Los Angeles class submarine: 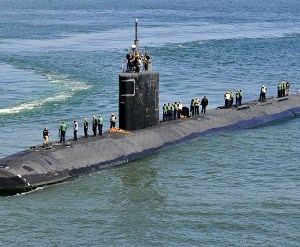 An SSBN can carry up to 24 Trident II submarine-launch ballistic missiles while an SSGN can carry a max of 154 Tomahawk cruise missiles and complimentary Harpoon missiles.

Like other classes of submarines, they are equipped with sensors and processing systems. They can travel at speeds up to 25 knots (equivalent to 46 kilometers per hour or 29 mph), and their test depth is over 800 feet or 240 meters.

These are also fast attack submarines, abbreviated as SSN. Starting with design work in 1983, this class of submarine is meant to be the Los Angeles class submarine’s successor.

They were made to deal with the threat of the Soviet’s increasingly advanced ballistic missile submarines and attack submarines. These submarines are quieter, larger, and faster. They can also carry more weapons.

This is what a Seawolf class submarine looks like: 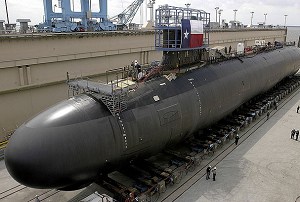 These are cruise missile fast attack submarines. They are also commonly referred to as the SSN-774 class. These submarines have all the latest in intelligence gathering technology and weapons systems. They can go on open ocean missions as well as littoral missions, such as anti-submarine warfare operations. These submarines are expected to serve the U.S Navy until 2060 to 2070.

They have unified modular masts and photonic masts. Their solar systems are improved, and they carry rescue equipment like lithium hydroxide canisters.

With an S9G nuclear reactor propulsion, Virginia class Submarines’ speeds can reach up to 35 knots (~65 kilometers an hour or 40 mph). Their test dive depth is allegedly up to 1,600 feet or 490 meters.

Here is a photo of a Virginia class submarine: 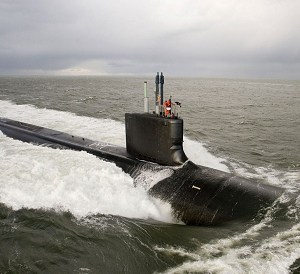 Outside of Wikipedia, Deep Submergence Rescue Vehicles, shortened as DSRVs, are also named as a type of military submarine. They are manufactured by Lockheed Missiles and Space company and launched in 1970.

DSRVs are used for quick deployment when there is a submarine accident. They can be transported by an aircraft, ship, truck, or larger mother submarine. These vehicles would dive and carry out sonar searches to rescue up to 24 personnel per transfer to a mother submarine.

They are made with an arm that can lift 1,000 pounds. This arm clears hatches on disabled submarines and also serves as a cable cutter.

Powered by electric motors, their speeds reach 4 kts, and their tested submarine max depth is 5,000 feet or 1,524 meters.

This is what a Deep Submergence Rescue Vehicle (DSRV) looks like: 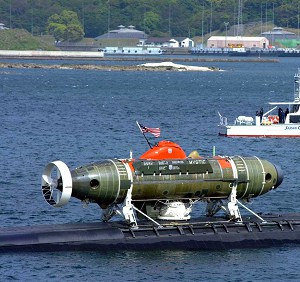 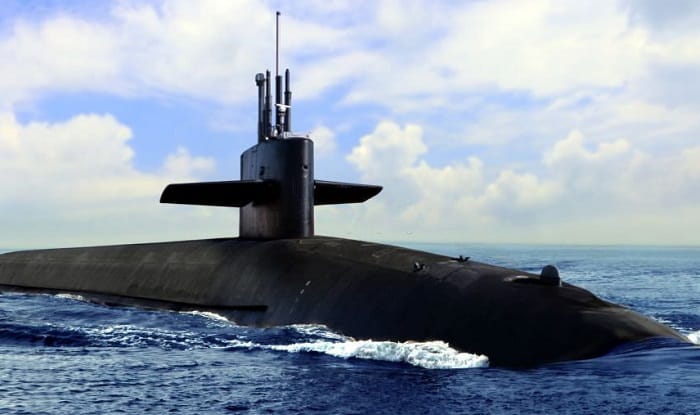 What is the deepest diving military submarine?

The deepest military submarine dive is roughly 10,911 meters (35,797 in feet) by the Trieste submarine. It is a submarine designed by the Swiss but built by the Italians. The Trieste established this record during the Challenger Deep of the Mariana Trench.

The record was broken and the new title bearer is the modern submarine Victor Vescovo. It dived ~10,928 meters or 35,853 feet deep!

No. The crush depth is where the submarine would explode as a result of diving pressure. The max depth, usually, would leave “room to spare” before reaching the crush depth. The hull crush depth for a nuclear submarine is mostly classified.

As you have read the answer to, “How deep can a military submarine go?” is over 600 feet. The specific is dependent on the type or class of submarines, which are Los Angeles class, Ohio class, Seawolf class, and Virginia class. We also mentioned Deep Submergence Rescue Vehicles, which is a less known submarine type.

Hopefully, this has been interesting and informative. Leave your thoughts and any follow-up questions in the comments down below. If you know anyone who is interested in this matter, please help us share this article with them, as well!