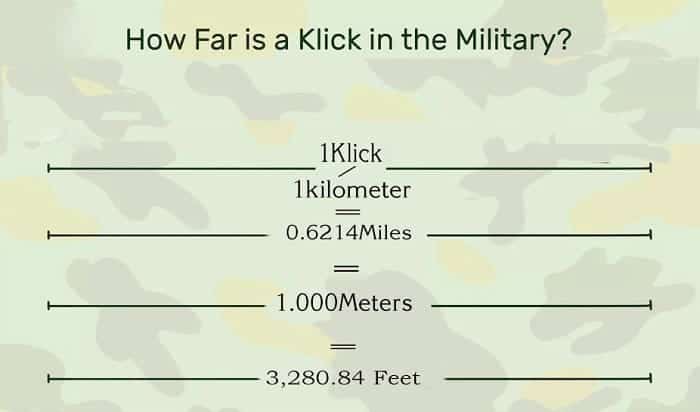 Among the countless military jargon and lingo, you may have heard of the term klick, especially if you are a military video game, movie, show, or book geek. Sometimes, this term is also called a click.

If you are about to enlist, you will most certainly come across this term. Thus, it is good to know what click military distance means beforehand. Prepare ahead by reading this article!

In the military context, klick is a measurement of distance. So, how far is a klick in military terms? The short answer to this is: a klick is a kilometer. But, as with many other military terms, there is more to this. So, continue to read for the details. 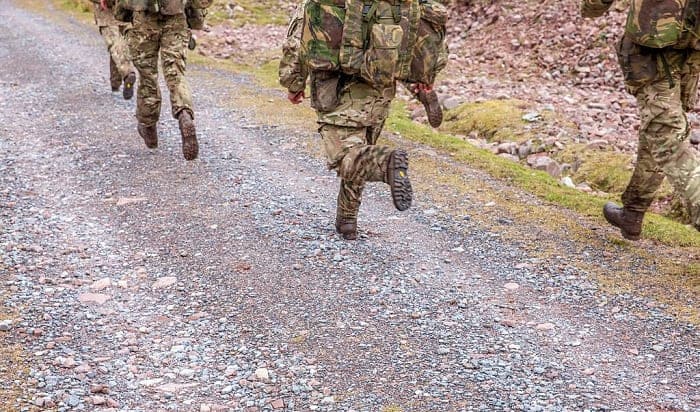 Meaning of Klick in the Military

As a distance measurement, klick distance or click distance is used for ground infantry, regardless of whether it is allied or hostile. Military forces refer to it in both traveled and target distance from any point of interest. For example, a klick in dialogue is when we have walked 15 clicks or the enemy unit is five clicks North.

Since a klick is equal to one kilometer, it is precisely 1000 meters in the metric system or 0.62 miles in the imperial system. For example, if something is one klick away, it is essentially 1 kilometer or 0.62 miles away.

Why Does the US Military Use Klicks

Even though most Americans do not use the metric system, the United States Army uses it because there are many joint operations and communications with other countries that do not use the imperial system.

It is believed that only three countries in the world use the imperial system, which are the United States, Myanmar, and Liberia. As such, U.S service members deployed to foreign soils must adapt to the more popular metric system used by other nations.

Hence, klick emerged in the military as a universally accepted measurement of distance—kilometers. Klick is used over the term kilometer itself because of its shortness and easy pronunciation.

Military personnel across the world can use and recognize this measurement. This common use prevents miscommunication and miscalculations when conducting military missions and/or combat operations.

Klick is usually incorporated into military communication tools, such as the radio. In addition, klicks align well with the use of 1 kilometer by 1 kilometer grid squares on military maps. For members in service, locating points is also more accurate with klicks.

Moreover, klicks can easily be converted into meters, which is the standard unit for most foreign maps, most notably those on landscapes and/or terrains with elevation contour lines measured.

The History of Klicks

There is no agreed-upon story behind the term klick. However, there are two main theories.

The first one is that this word was adopted during World War I, which was from July 28, 1914, to November 11, 1918. The U.S, however, did not join until 1917, providing medical and tactical supplies. During this time, the barrier of languages was settled with a common measurement: klick, shortened from the term kilometer.

Another claim is that the term originated from the Vietnam War era, starting from stationed Australian soldiers.

The theory was that a system in place would indicate to soldiers every 100 meters to push up their rifles’ gas regulation. After 10 pushes, the gas regulator rewinds to its initial position and makes a clicking noise. Thus, birthing the term klick for a kilometer.

There are a few other theories on the origin of a click in army terms, check them out here:

Today’s Use of Klick in the Military

Regardless of its history, however, klick has solidified its position in today’s military dictionary. Its predominant appearance is in radio communication since these devices require a quick and good transfer of information.

Thanks to its short form and non-complicated pronunciation, saving three syllables, as mentioned earlier, klicks are ideal for relaying messages.

With that, you have reached the end of the article on how far is a klick in military terms. You should now be aware of the meaning behind this term as well as its conversion, origin theories, and contemporary uses.

If you are a soon-to-be service member, you can rest assured that you will not be caught off guard when the term klick is thrown at you during missions or training. To recap: click is the standard measure in the military. The word klick is intended for widespread use—a klick is a kilometer.

Hopefully, this has been helpful. If you have any follow-up questions or thoughts, please do not hesitate to share them with us in the comments. We are always happy to hear and converse with our readers!