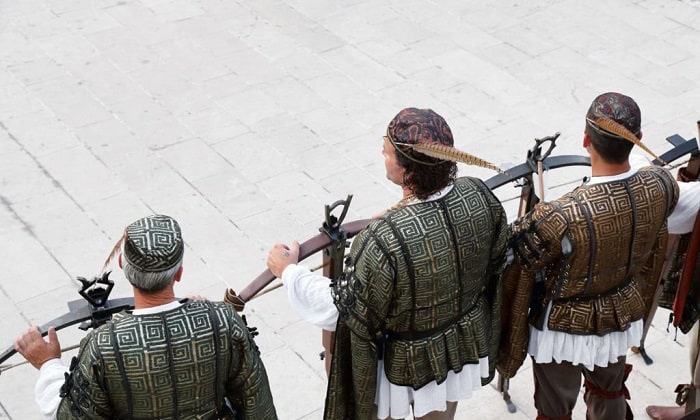 Many inventions originated in Ancient China. For example, China’s development of gunpowder changed the world. Do you know any other Ancient China contributions?

How about, “What new military technology did the Chinese develop around 350 B.C.E?”

It is the crossbow — introduced into warfare between 481 and 221 B.C.E (aka. the Warring States period). It played a significant role in the Chinese success against foreign armies and in establishing the Han and Sung empires’ dominance

Learn more about this Chinese invention in the paragraphs below!

The Chinese crossbow included a horizontal bow and short wooden stock. It could fire single or multiple arrows, which were equipped with bronze heads. The shafts of the arrows were made of wood, while the vanes were feathered wood or paper to ensure their trajectory stability.

The arrow shafts were sometimes also made of reed, cane, or bamboo. And the vanes measured 10 cm to 15 cm in length and 2 cm in height. In battle, a shooter would carry at least 10 arrows.

The earlier arrowhead versions had two blades. However, over time, they were developed to feature three blades, matching the number of vanes. The three blades also helped increase its flight accuracy. Finally, the trigger and firing mechanism were made of bronze.

How Did It Work?

For the crossbow to fire, the shooter must first place it vertically and brace it under the feet while pulling back the cord.

After a while, a belt hook device was developed, and this allowed the shooter to draw the cord back while still staying mounted on a horse.

Smaller types of crossbows could be fired with just one hand and they could even fire two arrows at once. Meanwhile, the heavier crossbows served as artillery weapons.

Nonetheless, the early crossbows could only fire at roughly 600 paces and took time to reload. They were only effective in siege warfare and defense.

A Brief Recap of Its Historical Development

The crossbow was first invented sometime in the 6th-century B.C.E by Ch’in Shih of the Chu state. It was made of wood. But these were not officially recorded as the first crossbows in Chinese warfare.

Some cities also state that the bow was invented by either the Yellow Emperor or Emperor Yi.

The ones brought to war were in 341 BCE during the Battle between the Qi and Wei states (aka. the Battle of Ma Ling).

Its Use & Evolution Through Chinese Dynasties 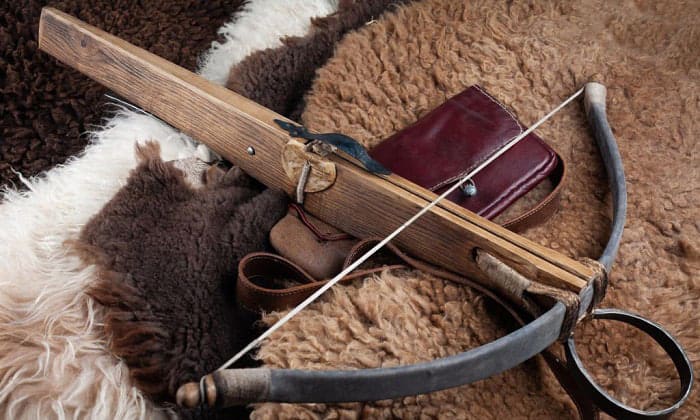 1. Shang warriors’ weapons were tipped with what?

The Shang Dynasty ornate bows with jade and gold. These were often presented as rewards for military prowess on the battlefield or to confer an honor.

From the Shang onwards, bows were made of eight pieces, like strips of bamboo bounded together by silk or glue. The glues were usually from animal or vegetable matter. Strings of the bows were made from leather, plant material, or twisted silk fibers. And the woods could be silkwood, mulberry, quince, orange woof, or thorn.

Sizes varied depending on the physique of the shooter. Shang bows were recorded to be about 42 inches in length. But there were smaller and larger versions.

The Eastern Zhou Dynasty armies were also renowned for their use of crossbows among elite units. And since then, it was generally agreed that a good crossbowman was more worthy than 100 infantry soldiers together.

But the dynasty that is known to credit the crossbow the most is the Han Dynasty (206 B.C.E to 220 C.E). They used both light crossbows and heavy crossbows. Their tactic involved crossbowmen firing as a unit into an enemy infantry flank during an ambush. During this time, the crossbow scale of production had increased greatly.

The crossbow became less popular in the Tang Dynasty (618 C.E to 907 C.E). Although it was still used by small to protect infantry flanks, it was mostly replaced by the composite bow.

By The Sung Dynasty, a newly-adjusted crossbow has come around: the repeating crossbow.

It was able to fire a bolt every few seconds. There was also enhanced firing power, added sights to boost accuracy, and stirrups to support with cocking the weapon.

Chinese soldiers used these to fire from behind their shields. Then, they reloaded them by moving back behind infantry lines. This is a similar tactic to current-day firing volleys.

Another technique was to advance in a circular motion. The soldiers would rotate their fire and protect one another while reloading.

As the crossbow became better, armies also started equipping accessories, such as helmets and armors, to handle them. In addition, leather straps were secured to the cords and helmets to improve protection.

As mentioned briefly above, the heavier crossbows were used as artillery weapons. In addition to being heavier, they were larger. They fired single and/or multiple bolts from a fixed position, but could also be mounted on wagons and chariots for quick movement when required on the battlefield.

The latter was employed during siege warfare of the Warring States period (481 B.C.E to 221 B.C.E). They could bypass even the high walls and towers. Accompanying them were windlasses and pulleys to pull the cord back easily.

An example of a heavy artillery crossbow was one the Han dynasty used, mounted on a revolving base. It weighed up to 159 kilograms and was worked by very strong men referred to as “chueh chang.”

Its Impact on Warfare

The crossbow has a big impact on warfare. It was a technical weapon, so it required the shooter to grasp the know-how of its construction and use.

It was effective against slow-moving chariots, particularly on unfavorable terrain. It is believed that this may have been one reason why the chariot in Chinese warfare eventually ceased.

The firing range of a crossbow (which continued to increase) allowed soldiers to attack despite natural obstacles and thus, war can happen at a distance.

So, you have just read about the essentials of the crossbow as one of the achievements of China in terms of weapons in warfare. It is just one on China’s long list, but it is well-worth learning about! Did you find it interesting?