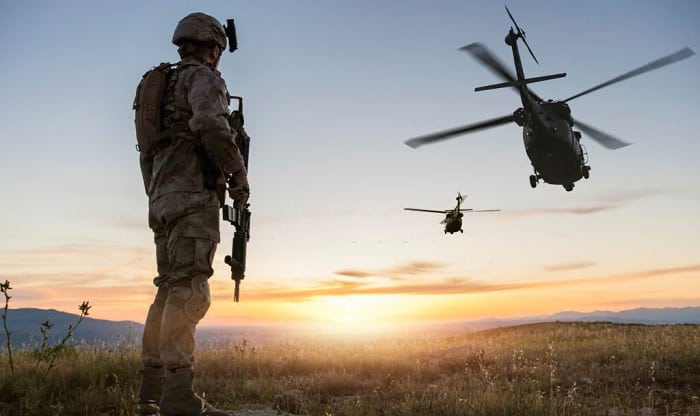 Within the U.S military’s vehicle “kit,” helicopters cannot be left out. Sometimes referred to as military aircraft helicopters and military choppers, they play a crucial role in all the military service branches.

You can order helicopter identification charts and posters on Amazon, but we already have what you are looking for here, for free!

Keep reading to find more details on each type of helicopter. We also have pictures to help you visualize! Do not stop until the end!

As you have read, there are different military helicopter types; we will look at each in detail now. First, we will start with attack helicopters.

This military helicopter type is considered the most lethal. It is made for engaging with enemy targets on the ground. So, it is equipped with an assortment of weapons, such as auto-, machine guns, rockets, etc. It is similar to ground attack fighter jets. But it can fly for a longer period and closer to the ground. 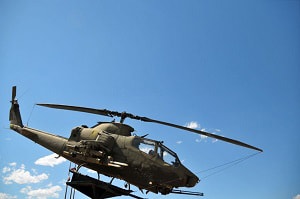 Manufactured by Bell Helicopter Textron, the Bell AH-1G Cobra first flew in 1965. It was the world’s first, and served the U.S military until 2001. Here is what it looks like:

It has a single engine and is often also called the HueyCobra or the Snake, given that it is a member of the Huey helicopter famiy. 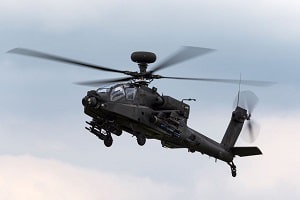 This was manufactured by Boeing, following the Hughes Helicopter buyout. Its first flight was in 1975 but was not officially introduced until 1984. The Boeing AH-64 Apache is still in service today.

Apart from the U.S military, this helicopter is used by Egypt, Israel, and the Netherlands’ Air Forces. It is typically equipped with chain guns, missiles, night vision equipment, and a targeting system. 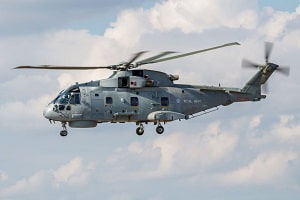 This Bell-manufactured helicopter first flew in 2000. It was formally introduced in 2010 and is still a part of the military’s helicopter crew. 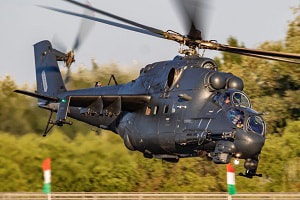 An example outside of the U.S military is the Mil Mi-24 (Hind). It serves in the Russian Air Force. The Mil Mi-24 (Hind) was manufactured by Mil Helicopter Plant and introduced in 1972. It is armored and fitted with auto-cannons (twin-barrel), machine guns, rockets and missile launchers, etc.

This type of military helicopter is often also referred to as a cargo helicopter. In essence, it is the delivery man for troops during missions and operations. In addition, it deploys troops. It moves back and forth between frontlines and bases.

There are three subtypes of military transport helicopters: 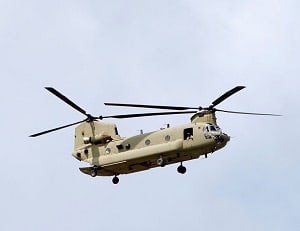 This transport helicopter was manufactured by Boeing. Its first flight was in 1961. Boeing CH-47 Chinook was introduced in 1962 and has been in service since then. Until today, 1180 of it has been built.

Although Boeing CH-47 Chinook is well-known in the list of U.S Army helicopter names, it is also used in India, Singapore, the Netherlands, and Spain’s Air Forces. Here is what it looks like: 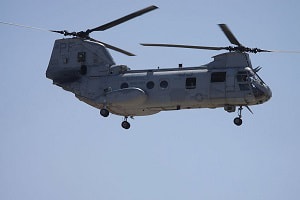 This is another Boeing helicopter. It is a medium-lift tandem rotor transport helicopter. Both the Army and Navy operated it until 2014.

This helicopter type is made to have multi-mission capabilities, like aerial attack, transport, search and rescue, medical evacuation, command, control, and surveillance. Out of all the military helicopter types, it is the most common. 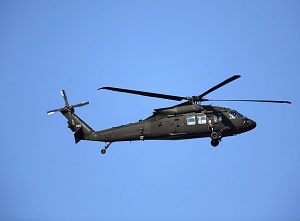 You might have seen this in the movie “Black Hawk Down.” It is a relatively new Army helicopter, having replaced the Bell UH-1. Here is a picture of it:

It has seen combat in various conflicts, such as those in the Middle East, the Balkans, Grenada, Somalia, and Afghanistan. 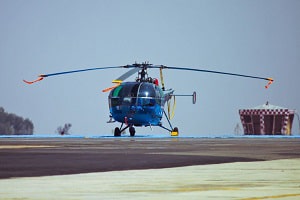 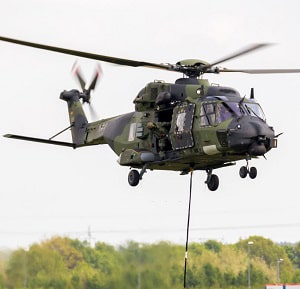 This is a medium-sized utility helicopter. It was introduced in 2007, so it is considered relatively modern. It has multi-mission capabilities and is serving in the Air Forces and Naval Forces of European countries, Middle East countries, and Australia. This is what it looks like:

This type of helicopter is designed to spot enemy positions and then direct artillery fires or air strikes. It has cockpits that are large, rounded, and well-glazed for pilots to access unobstructed visibility.

Like other armored helicopters, this helicopter type also has weapons for self=protection and destroying the enemy. Standard weapons are auto-cannons, machine guns, missiles, and bombs. 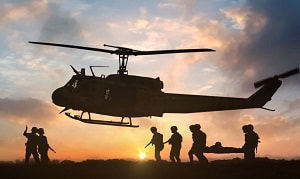 This Little Bird helicopter was manufactured by MD helicopters for the Army Special Operation Forces. It debuted in 1980. Here is a picture of it: 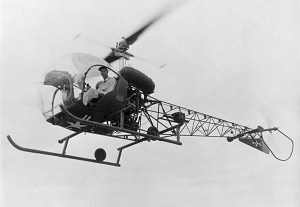 From the Bell Aircraft Corporation, this light helicopter was a Bell 47 variant. It was introduced in 1946, a year after its first flight. 2407 of them were made and used until 1974. This is an old picture of it: 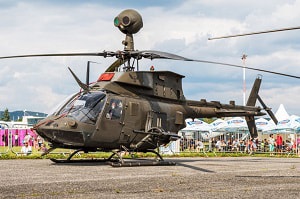 This is another Bell observation helicopter. It also serves as a utility helicopter. On it, troops can benefit from thermal and television imaging systems, laser rangefinders, etc. The U.S army used it until 2020. It was used in the Vietnam War, the Gulf War, and the Iraq war. 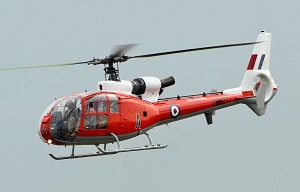 This is another 2-in-1 helicopter: observation and utility type. It was a popular choice during the Syrian Civil War, the Lebanon (1982) War, the Iran-Iraq War, and the Gulf War. Here is a picture of it: 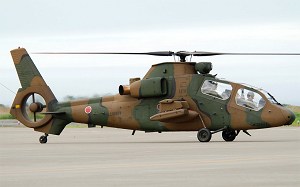 Nicknamed “The Ninja,” this helicopter is a Japanese observation helicopter, serving in the Japan Ground Self-Defense Force (JGSDF). It can fly up to 278 kph (173 mph) and is equipped with an autopilot system, forward-looking infrared sensor, color TV camera, and laser rangefinder, among other equipment.

This type of helicopter is made to be operated from sea bases and to perform multi-roles. It can serve as a helicopter for transport, search-rescue, anti-submarine warfare, anti-shipping deterrent, etc.

They are usually designed to save space. For example, you can find folding rotors, hinged tails, etc. Their construction materials are also made to reduce weight while increasing range. 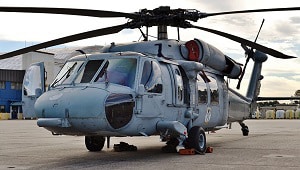 This is a helicopter manufactured by Sikorsky Aircraft Corporation. It is a variant of the Sikorsky UH-60 Black Hawk and debuted in 1984. It served diligently in the U.S Navy and Naval Forces of other countries, including Australia, Spain, and Turkey. This is what it looks like: 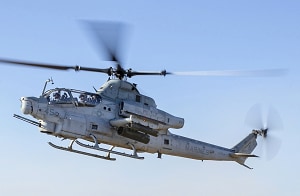 This is a medium-lift helicopter made by the UK and Italy. It debuted in 1999 and at present, is serving in the Royal Navy, Italian Navy, and Danish Air Force. Thanks to its multi-mission capability, it can fulfill various roles. Here is what it looks like: 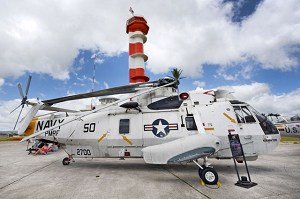 This is an important player in the U.S Navy for anti-submarine warfare, as implied in its Sea King name. It can perform well in other multi-role operations as well.

This type of helicopter does exactly what its name says. It is used to search for wounded and fallen troops and rescue them. This type was first used in World War II.

But they have since evolved. Modern search-rescue helicopters have advanced avionics and radar systems to make locating more efficient, especially in difficult weather conditions and rugged terrains. 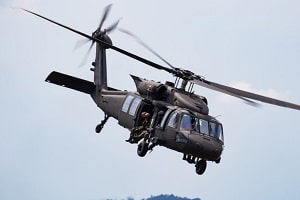 This is a search-rescue helicopter currently used by the U.S Air Force and the South Korean Air Force. It is somewhat similar to the UH-60 Black Hawk but still has its unique avionics systems. It can operate date and night and in all weather. 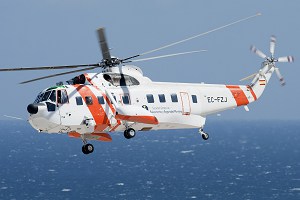 This is another search and rescue helicopter from Sikorsky. It was introduced in 1961, and since then, has been used by the U.S Air Force and Coast Guard. Beyond the U.S, it is also operated by the Tunisian Air Force.

This type of helicopter is usually a spin-off of operation light helicopters. It is primarily used for training pilots. Hence, it has basic flight controls. Usually, one helicopter can accommodate a crew of two. 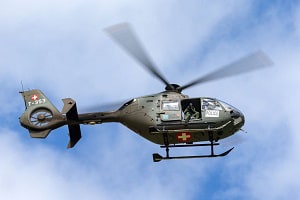 This helicopter’s original name is Eurocopter EC365. But after being converted for the military, its name is Airbus Helicopter H135M. It is an aircraft with twin engines. It can carry a maximum of 8 people and a range of armaments or equipment. Here is what it looks like: 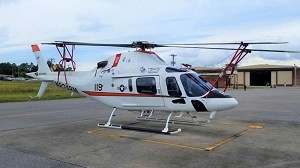 This modern military helicopter is operated by the U.S Navy, Marine Corps, and Coast Guard. It is made to help provide advanced training to pilots. There are the latest avionics technologies equipped that pilots can avail of. 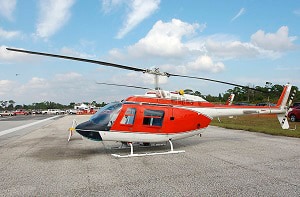 This is a military helicopter used by the U.S Navy and Marine Corps. It is well known as a variant of the Bell 206. Here is a picture of it:

Now, you know all 7 types of military helicopters and examples of each type. Hopefully, you have found it informative and interesting. The pictures should help you visualize the helicopters better, as well. Let us know what you thought of our article in the comments below. If you have anything else to add or ask, feel free to reach out to us in the comments too.