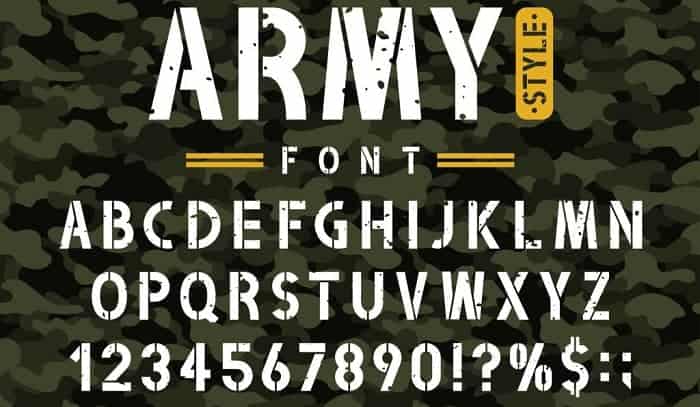 If you are a military geek and have an eye for detail, you probably may have noticed from military posters and movies that particular fonts are used repeatedly. Outside the military context, you may have encountered fonts that give off major military vibes. But, specifically, what font does the military use?

There is no single standard military font that is used for everything in the military. Generally, the military uses block fonts and stencil fonts.

But if you want to know the specific names and details, continue reading.

In this article, we will discuss common military fonts on paperwork and military equipment, as well as modern military-inspired fonts and publicized military fonts as part of each branch’s brand guidelines.

The most common military font names you will hear are Arial, Times New Roman, and Courier. These are not too fancy fonts but are preferred for their optical characters, which guarantee optimal readability and clarity.

Usually, they are used for proposals and paperwork because they suited the need for crisp fonts that permitted inks to come through well without leaving any smears.

In the past, when there were just mimeograph machines and typewriters, Courier was the go-to font. Not a lot of choices on what font to use.

Moreover, typewriters usually came with Courier preinstalled and the option to switch between fonts did not come until later with the birth of the IBM Electric typewriter.

For scannable documents, OCR fonts were selected and prepared to process text with minimal errors.

Today, with computer typesetting, the standard military fonts in Microsoft Word—Times New Roman and Arial—have taken over the reign. Sometimes, they are substituted by Helvetica. However, the use of fonts can vary depending on the preference of commanding officers. 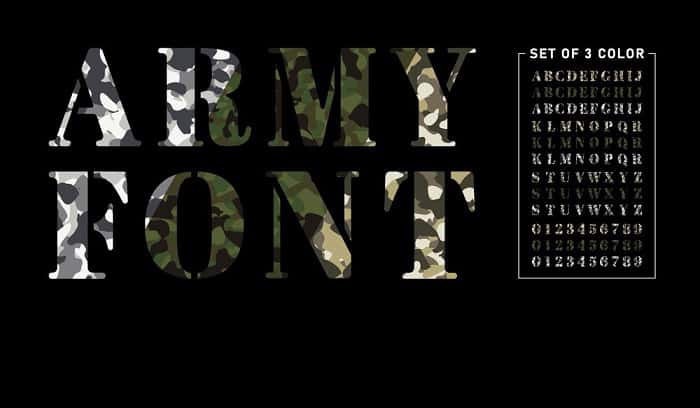 To meet the readability and clarity criteria, fonts on military equipment are often big and bold. Block and stencil typefaces are the most typical.

Today, many block fonts are designed so that they can easily be modified into a stencil version. The military uses stencil sets to spray paint labels onto equipment, barrels, boxes, etc. So, today’s digital versions mirror the disconnected parts of the font.

A quick search on Google will give you a lot of newly-designed military-style fonts. These are primarily used in military-themed content, such as films. However, they are not necessarily the same fonts used in the military. They do, however, give off military vibes.

Many fonts are inspired by the military, featuring a retro style. They tend to be heavy typefaces that are rigid in structure—so military block fonts, Cursive and fonts with many wiggles are not common.

What Font Does the Military Use 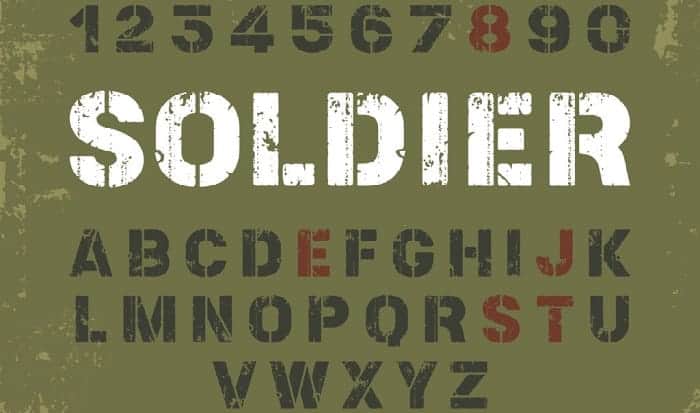 ITC Machine Medium font is the most similar to the one used on the United States Army logo. It is a Sans Serif font designed by Ronne Bonder and Tom Carnase. Another font that closely mimics this font is NFL Dolphins font.

The navy has five main fonts that they use to create a consistent brand identity. These are all within the Roboto font-family: Roboto Regular, Italic, Bold, Bold Italic, and Slab Bold.

The military selected these fonts because they are easy to read even in small sizes and are compatible with web browsers. The difference between bolded Roboto and non-bolded Roboto is also obvious enough to differentiate between text types.

In the Air Force logo, the words “U.S. AIR FORCE” is displayed with the Bold-Extended Berthold Akzidenz Grotesk font. If this font is not available, for some reason, Arial Bold Black font can be substituted.

For the Marine Corps, Colossalis is the main font. Sizes are from 24 to 80 for H5 to H1s. The only exception is H6, where Arial Regular is used at size 18.

The Coast Guard’s Emblem features “UNITED STATES COAST GUARD” and “1970” in the Univers Bold font. This logotype is all in the block and capitalized.

For the Coast Guard Signature, Helvetica is used, with the alternate font being Arial.

Any signs at the Coast Guard entrance will be written in Univers Bold Helvetica or Arial font.

Consistent typography is very important to maintain a consistently professional image. Deviations for other mediums must ensure that fonts are clean and easy to read. Hence, avoid using Times New Roman since it has thin ligatures as well as any cursive and ornate fonts that are hard on the eyes.

To ensure a consistent identity, the Department of Defense (DoD) also publishes information about its typography.

The main typefaces are Lato, Oswald, and Crimson Text.

These fonts go in line with the brand image that DoD maintains with its logo, color scheme, tone, etc.

If the primary fonts are not available, Arial, Franklin Gothic Medium Condensed, and Times New Roman can respectively serve as alternatives.

Variants of these fonts in terms of light, regular, and bold weights can be mixed and matched for presentation. Generally:

So, now you have detailed answers to “What font does the military use?” Hopefully, you found it helpful.

If you have anything else to share on this topic of fonts in the military, do not hesitate to let us know in the comments. We are always delighted to hear from our readers!