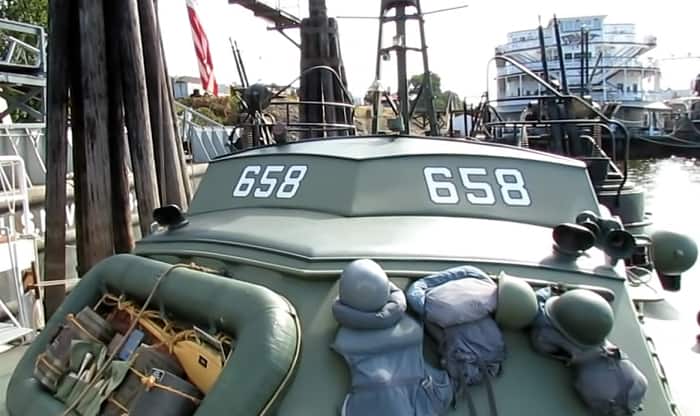 The PT boat is one of the many types of vessels that the U.S used to win wars. Have you heard of this? Do you know what is a PT boat?

A PT boat is a motor torpedo boat. It was used in the Second World War by the U.S Navy. Keep reading to learn more about this “weapon.”

We will cover the basics, including how and where they were used, what their characteristics were, what types existed, what were the different parts, and whether they are still here today. Read until the end to make sure you get a complete understanding!

During the war, Navy PT boats went against the enemy’s barges, tankers, sampans, and warships. There were also some that became gunboats, combating the enemy’s small craft, like armored barges.

They were used in the Pacific (Southern, Western, and Northern regions), the English Channel, as well as the Mediterranean Sea.

Let’s start with a visual. This is what the WW2 PT boat looked like: 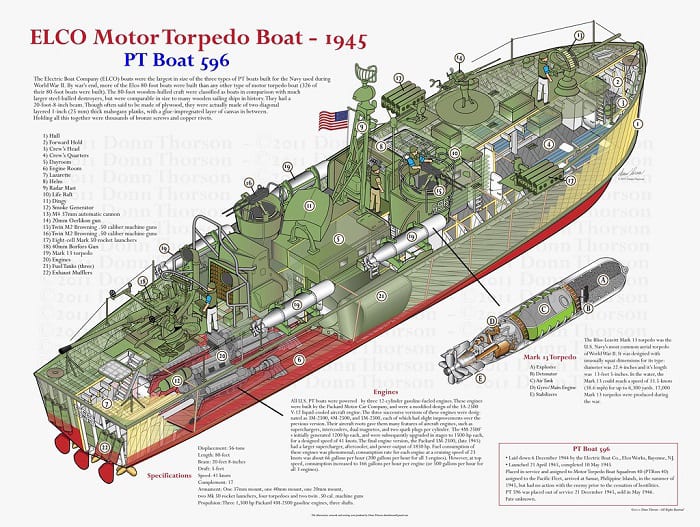 Three officers and 14 enlisted members can fit on a PT boat.

They all had a full load displacement of 56 tons.

The hull was favorably light, strong, and easy to repair.

Note: Front line PT boats were modified to fit other weapons, such as 37 mm aircraft cannons, mortars, and rocket launchers. These are referred to as converted PT boats. Some special PT boats also carried naval mines.

There Were Three Types of Pt Boats:

Elco PT boats were the longest of the three (80 ft). A total of 326 of this type of boat were built during the Second World War.

What were PT boats made of?

They were made of thick mahogany planks, which were diagonally layered and glued together. There were also screws (bronze) and rivets (copper) that held the boat parts together.

These boats were not damage-proof, but they were easy to repair at the front lines.

Higgin PT boats were shorter than Elco PT boats (78ft), but they had the same engine, generator, beam, and crew accommodation. Their shaft horsepower, full-load displacement, and trial speed were also the same.

The first ones made for the Navy were part of Squadrons 13 and 16 and used in the Aleutian Islands battle, as well as the MTBRON15 and MTBRON22 in Germany.

Compared to Elco, there were not a lot of Higgins PT boats made. But more of them survived. While only 3 Elco hulls existed and 1 restored, Higgins had 7 hulls and 3 restored. 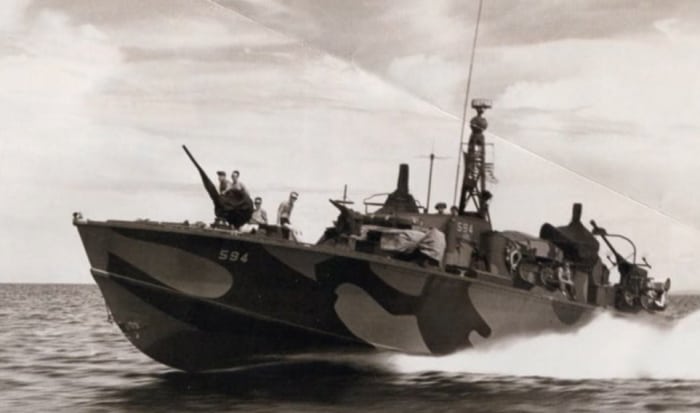 The topside of a PT boat includes the following parts:

Here are some of the tools that are stowed and used on the topside:

Now, let’s take a look inside PT boats. Here are the key parts below the decks.

A Brief History of PT Boats Use

PT boats went on patrol at the Mason Line, formed a barrier against Germany S-Boats, and carried out mine destruction missions.

Instead of being kept for the peacetime Navy, PT boats that survived after they were discarded. They were stripped of potentially still useful parts before being burned on the beach.

This is the PT-305, also referred to as the USS Sudden Jerk. It is the most recently restored abandoned PT boat. The PT-305 was a Higgins boat that was a part of Squadron 22, which served in the Mediterranean.

Apart from the fundamental question “What is a PT boat?”, you should now know lots about this World War 2 “weapon,” including how and where they were used, what their characteristics were, what types existed, what were the different parts, and whether they are still here today.

Hopefully, you have learned a lot and have found the info interesting. If you think this can be of benefit to other readers, please help us share this article. Feel free to leave your thoughts with us in the comments! We also welcome questions! So do not hesitate.