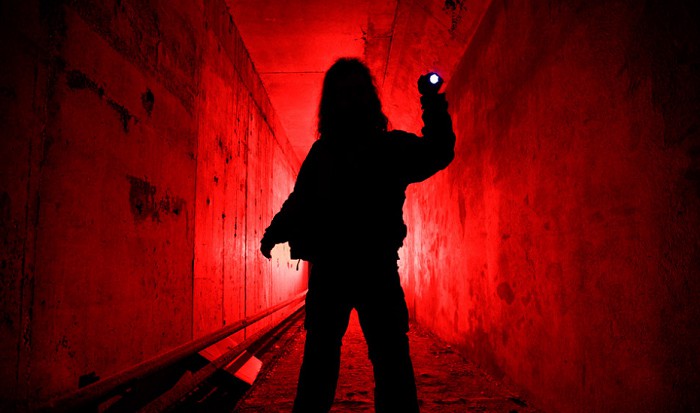 This is something that I have been pondering on for a while. So, I did my own research and was able to curate that a red flashlight’s military purposes include preserving and improving night vision, reducing a person’s light profile, and sending out signals.

However, there is more to know about each of these red flashlight purposes, so be sure to read this article until the end.

3 Purposes of Red Light Flashlights in the Military 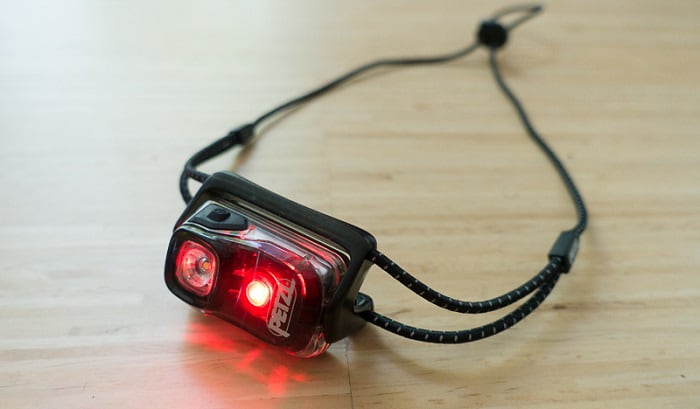 The military uses red light headlamps as well as red handheld flashlights. Although they can vary by design and specific features, the fundamental focus on a red light is the same. As I have mentioned earlier, there are three reasons why the military uses red light for their flashlights: to preserve and improve night vision, to reduce a person’s light profile, and to send out signals. Now, let us explore each of the reasons in detail.

The first purpose of red light on headlamps and handheld flashlights is to preserve and improve night vision.

Military service members often work in the dark, when the sun is down. Sometimes, the moon is dim. So, it is not a reliable source of light. To be able to see at night, military personnel rely on flashlights. This is also the case for other unlit environments, like caves, tunnels, and other underground spaces.

The typical flashlight with white light is bright. However, this brightness is too much for night vision equipment to handle. It is harsh on the eyes, especially if it is suddenly switched on or off.

When the light-sensing cells in your eyes’ retina are over-stimulated because of bright light, a lot of signaling chemicals are released, damaging the back of your eyes. This “injury” can then lead to cataracts, which cause blurry vision, or worse, loss of eyesight.

Thus, for the health of your eyes and vision, red light is used. The human eye is less sensitive to red light. So, our eyes will not “shut down” when we go from a lit setting to an unlit setting while using red light. In other words, the damage is minimized when we use red light.

By the same token, compared to white light, our eyes can more quickly adjust to the darkness after we turn off a red light. In addition, a red light does not create any light blinding spots, which, in turn, can result in time lags. Since this is a military setting, time lags are more important than you might think; a lot can happen in just a blink of an eye.

Red light headlamps and flashlights are generally used by members staking out or on patrol. They usually go in pairs or groups. Therefore, using red light is not only better for the user but also their fellow members, who are closest to them and share the same sphere of light.

For all these reasons, red light helps preserve and improve night vision. Needless to say, good night vision is a must for military personnel. Hence, it is understandable that the military uses red light.

The second red light headlamps purpose and use of red light handheld flashlights is to reduce a person’s light profile. Since the human eye is less sensitive to red light, it is not as easy for us to detect or catch a red light, especially when we are far away from the source of light.

This means that the light signature of the person using a red light is not “too” visible to others. So, why is this a good thing?

Let’s recall that users of red light headlamps and flashlights are mostly service members staking out or on patrol. These members are close to the enemy, thus, it makes sense that they do not want to be spotted. With a red light, this is more ensured.

Military personnel can navigate, stop to read a map, or communicate back to a base with the vision provided by a red light but not worry about the light “giving away” their location. In this way, red light is “safer” for military service members.

However, it should be noted that red light is not “foolproof”. Its degree of effectiveness in this regard depends on a variety of factors, such as distance. Even so, it is better than nothing, right? A red light is still more preferable to a white light.

Last, but definitely not least, the purpose of red light headlamps and flashlights in the military is to send out signals. Since there are plenty of signal systems among military personnel, this is not too surprising, right? Red light can be used as an indicator of “identity” between service members on stake-out or patrol. It is a way of saying, “Hey, we are on the same side!”

Even though this sounds a bit funny, it is actually very practical in the military. It is not always easy to recognize whether someone is on the same side of you, given camo suits, face disguise, etc. It is also very difficult to “distinguish” in just a split second.

After all, if you give the enemy more than a second, you can already be shot dead or knocked down. Do not forget that all military members, regardless of the “side” they are on, are trained to respond quickly and put their nation’s safety above anything else. Thus, the pressure to quickly respond can lead to unfortunate mishappens where one of their own is fired at and killed.

Red light signaling is also apparent in aviation systems. When an aircraft radio fails, the substitute is a signal lamp or a light gun, which can be red on certain occasions.

For an aircraft in flight, a steady beam signals circling and giving way to another aircraft, and a flashing red light is cautioning that the airport is not safe for landing. On the other hand, if the aircraft is on the ground, a steady red beam means STOP and a flashing one indicates that the taxi(s) are clearing for an in-use runway.

In another setting, red light is used for distressed flares and beacons. They alert “SOS” or an emergency call for help in the maritime context.

If you are interested in learning more about signal lamps or light guns systems, check out this Youtube video. 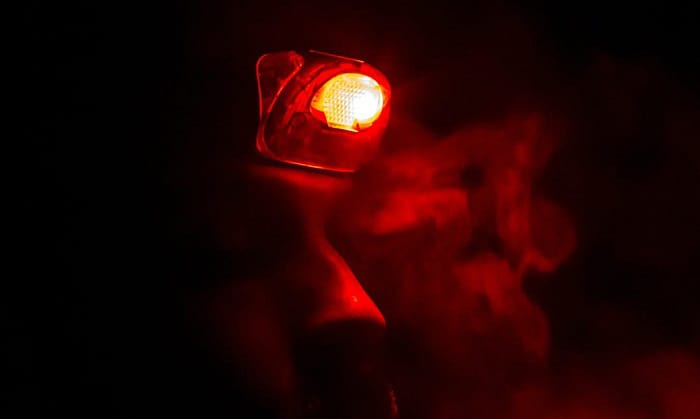 Three other potential reasons for the military’s use of red light headlamps and flashlights are as follows.

It is believed that bugs and insects are not as attracted to lights with lower color temperatures than white or blue. This means that they are more drawn to bright colored lights like white and yellow. Red makes it more challenging for bugs and insects to see the light source and is thus deterred. That being said, red lights are somewhat an “anti-pest” feature compared to white or yellow lights.

Just like white light can disturb the human eye in a nighttime setting, it can agitate wildlife. As military members often stakeout in the wild where creatures creep, it is better to use red lights, which do not make animals uncomfortable. This is incredibly important as some animals can become a hazard for those at the bases and campsites.

Red light does not contribute to light pollution as much as white light. This is a crucial aspect to note in military bases that are focused on space operations and communications, and minimal light pollution is necessary.

The military is a large and organized body. They are tasked with safeguarding the nation and its people. So, it is presumed that there are practical reasons for the use and selection of certain military equipment, like red light headlamps and flashlights.

As you have, there are three purposes to red light gear in the military. Did you like this article on “What is a red flashlight used for?” Is there anything else worth adding? Let us know in the comments below! We cannot wait to hear from you.