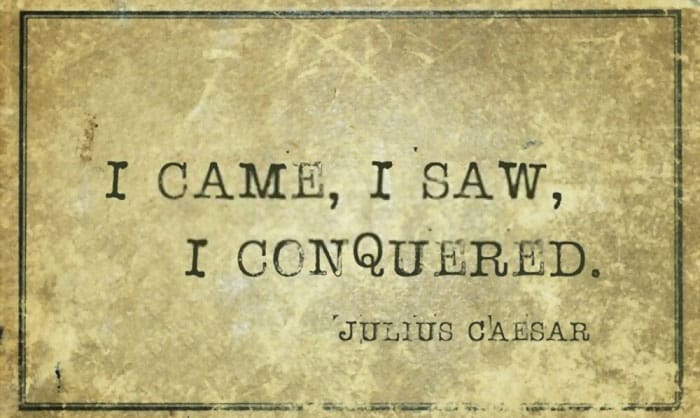 You must have seen this quote a billion times. It is printed on graphic shirts, baseball caps, tote bags, pillows, pencil cases, notebooks, to name a few. There are even memes of it! But did you know it was said by a military leader? (You learn something new each day, am I right?)

So, what military leader said I came, I saw, I conquered?

Julius Caesar is the man behind the renowned line. He originally said “veni, vidi, vici”, which is in Larin and later translated into the ever-so well-known English saying today. Now, let’s learn more about Julius Caesar and where and why he used this saying!

I Came, I Saw, I Conquered

You would expect a philosophical or artistic person to have said this line. But it was actually a Roman dictator! Who would have guessed, right?

Now that you have the answer to “Which military leader is quoted as saying, “I came, I saw, I conquered” read on to capture more detailed knowledge on Julius Caesar and the story of his “Veni, vidi, vici” expression.

Who Is Julius Caesar? 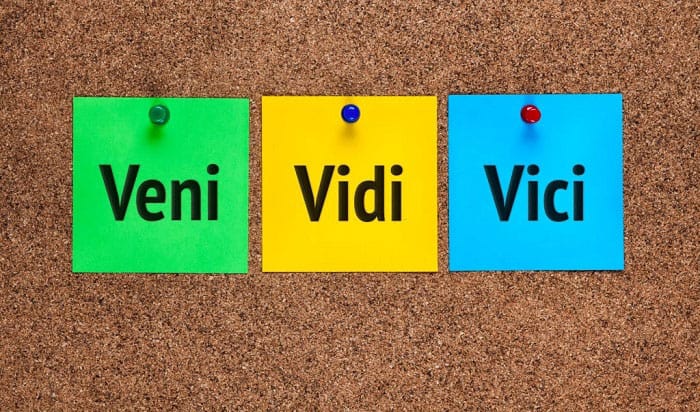 Julius Caesar was a Roman scholar, general, and politician. He was born on July 13, 100 B.C. His mother was Aurelia Cotta and his father was Gaius Julius Caesar. In 78 B.C, Caesar became a prosecutor, kickstarting his political career, and in 69 B.C, he became a quaestor.

Over the years, he became a magistrate, then the governor of Spain, and eventually, was elected as the senior consul in 59 B.C. One year later, thanks to his political alliances, he was appointed governor of Gaul. In this position, he commanded a large army and did exceedingly well in the Gallic Wars. His biggest achievement was conquering Gaul and extending Rome’s territory to the Rhine and the English Channel.

His success, however, turned him against his alliance (Pompey) and led to a “cut of ties” where Pompey resided with Caesar’s enemies to make him return to Rome and give up the army. His response was a civil war against Pompey’s supporters.

Together with his army, Caesar invaded Spain, Greece, and Egypt. He made sure to wipe out all of Pompey’s supporters in Africa and the Middle East. In 48 B.C, he became Rome’s dictator.

His reign lasted for 10 years and during this time, he implemented many reforms to help Rome’s middle- and lower-class. At the age of 55, sadly, Caesar was assassinated by a group of senators. He was stabbed 23 on the senate floor.

Where Did Julius Caesar say “I Came, I Saw, I Conquered?”

It is believed that Caesar coined this saying in his Latin prose works that chronicled his stories at war.

When Did Julius Caesar Say “I Came, I Saw, I Conquered?”

There are many different stories as to when Caesar used this famous line:

So, What Is This Battle of Zela? 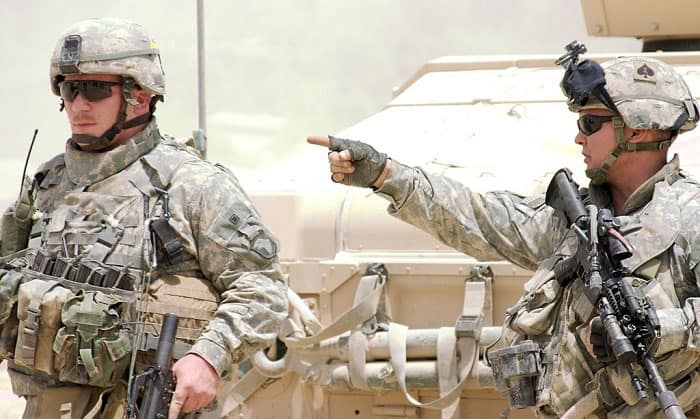 As implied in the name, this was a battle. It took place in 47 B.C and was between Julius Caesar and Pharnaces II of Pontus, which was a kingdom at the time. The battle happened on August 2. at a small town in northern Turkey’s Tokat province called Zela (now Zile).

On the other side, Pharnaces’s army had about 20,000 infantry, professional soldiers, legionaries, calvary, and scythed chariots.

This is a summary of how the battle went about:

For a more detailed cover of the battle, watch this documentary on Youtube.

Caesar’s command of the army in this battle was so complete and swift that he celebrated with the line, “veni, vidi, vici”. 150 years after the battle, in the book Life of Caesar by Plutarch and Lives of the Twelve Caesars: Julius by Suetonius, the saying was still reported.

Where Else Has This Line Been Used?

Since then, it has been used widely in military contexts:

Modifications of it have also been used in music:

It is also referenced in films! The most popular being a modified line in the Ghostbusters (1984), delivered by Peter Venkman, “We came, we saw, we kicked its ass!” This line was actually one of the 400 nominees for the AFI’s 100 Years, 100 Movie Quotes.

A few more modern uses of “Veni, vidi, vici” are illustrated below:

If you enjoyed this article, please share your thoughts in the comments and share the article’s content with other readers. We would appreciate it so much!