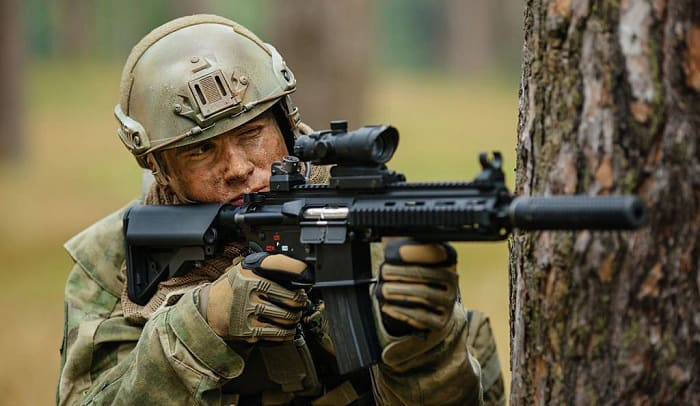 If you are looking into scopes and want the best of the best, you may want to research what the military uses. It is not a bad idea to consider the military as the highest standard. After all, the people there are tasked with the duty of protecting an entire nation. So, what scope does the military use? Find out by continuing to read our article here.

What Types of Scope Does the Military Use 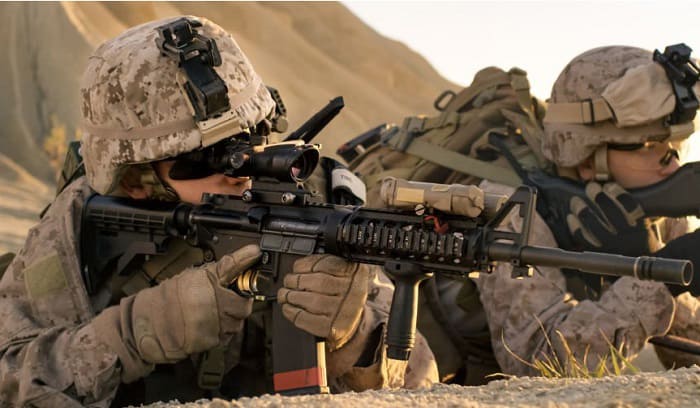 This is a rather broad question. As such, there is no single answer. The military uses a variety of scopes across branches and units. The scopes used are chosen based on multiple factors, such as the job it is used for, the nature, the types of scopes available, etc.

We do not have access to such details. However, we do have a list of scopes that different parts of the military have been known to use. We will go through each of them in detail below. You can stick around to learn more.

Also referred to as the M68 CCO, this is the common scope in the Army. It is compatible with M16 or M4 rifles, and it can be mounted on weapons that are fitted with an upper Picatinny rail.

The M68 CCO is a reflex sight with a non-magnifying red dot. At around 45.7 m or (50 yards, the red dot will not change position based on eye position. Its dot brightness is adjustable for better visibility and extended battery life (3V lithium battery 2L76 or DL1/3N) as well.

With this scope, soldiers are able to engage targets out to 300 meters and simultaneously keep both eyes open to maintain awareness.

This military-grade rifle scope’s specifications are as follows:

Aside from Army personnel, it is used by law enforcement organizations, such as those in SWAT cases and by recreational shooters. That being said, you can find it in the civilian market. In this case, you will look for the “Aimpoint CompM4.” It is durable, reliable, easy to use, and accurate. So, there is no reason to not like this military grade rifle scope.

This is a holographic sight, meaning the reticle is a hologram illuminated by a laser. Why is this a thing? Well, the reticle can be smaller; thus, accuracy is increased. The parallax of the sight as a result of eye movement at close range is the same size as the optical window and at ~100 yards or the set distance is 0.

The EOTech 553 can be used with many different weapons, including with non-folding sights. It is also compatible with night vision devices.

You can mount it on small arms using a Weaver rail or a MIL-STD-1913 Picatinny rail for target acquisition in addition to precise aiming.

However, as holographic projection involves lasers and lasers consume more power than LEDs, this type of sight has shorter battery life. Even so, run time is still up to 1,100 hours on CR123, AA, or N size batteries.

Non-military versions of this holographic sight are available as holo sights, 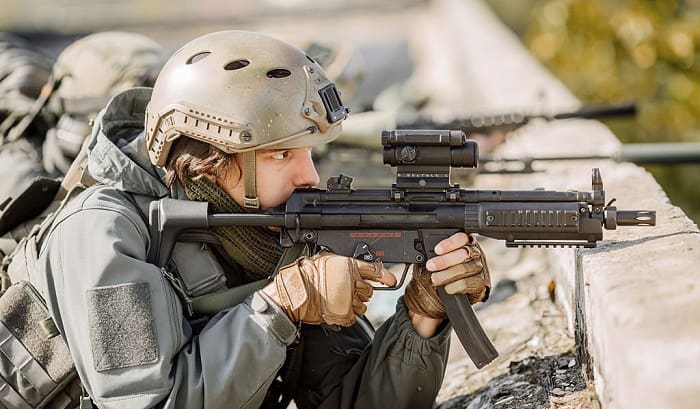 This is a part of Trijicon’s prismatic telescopic sights series. It was initially designed to be used with the M16 rifle and the M4 carbine. However, ACOG accessories have also been made so that the military optics can be used with other firearms.

The Army, Air Force, and Marine Corps use the Trijicon TA31RCO ACOG, which has a 32mm objective lens and a 4× magnification (4×32). It is specially designed with ballistic compensating reticles that are also fiber optic and tritium illuminated.

It can be paired with the M4 carbine and M16A4 rifle.

The Special Operations Peculiar MODification kit includes the Trijicon TA01NSN, which is another 4 x 32 ACOG. However, unlike the Trijicon TA31RCO ACOG, this one only has tritium night illumination along with backup iron sights.

You can also find Trijicon ACOG sights in civilian markets. They are durable, easy to use, and incredibly accurate. But you will need to shell out the big bucks for these military grade scopes.

This is one of the most common names for sniper sights in the military. Leupold’s contracts with the military go all the way back to 1988. Here are some of the names the military trusts and Leupold is most proud of:

This is built around a Barrett M82 semi-automatic rifle chambered in 50. It has been used since 1989 as a long-range sniper rifle system with a Mil Dot reticle. This site has seen deployments in Afghanistan, Kuwait, and Iraq, shouldered by the Army, Air Force, and Marine Corps.

This is for longer range engagements with gas-operated and semi-automatic rifles featuring an 18” barrel. Its scope has an illuminated TMR reticle. It was used by Special Operations during Operation Enduring Freedom.

This was made to replace the M24. It is chambered in 7.62x51mm NATO and is liked by troops for its semi-automatic capability and versatility. The scope has an illuminated TMR reticle.

This scope takes over after the M49 20X fixed scope. It is lightweight and variable, made for power spotting. It prioritizes recognition and identification at long range distances. The scope comes with a tripod, laser filter, and night vision adapter, and it utilizes a Mil Dot reticle. It was a trusted scope for the Marines in Afghanistan.

This scope accompanies a system chambered in 300 WIN MAG on a Remington 700 action. Its reticle is a H58. The Army used it for deployments in Afghanistan.

This scope is paired with M2 heavy machine guns and MK19 grenade machine guns. It enables better target identification and ensures quick, accurate engagements. The scope features a Mil Dot reticle. The Marine Corps used it for deployments in Afghanistan.

This system is made for close quarters and long ranges. It features an Aimpoint T1 red dot sight, which is compatible with multiple weapon systems such as the M4A1. It is available illuminated and non-illuminated with a Tremor 2 reticle. The Army, Air Force, Marine Corps, and Navy use it.

You have the option to purchase a Leupold Mark scope for yourself from the civilian market, but since these are top quality sights, you will be expected to pay hefty price tags.

This is another common name for U.S military sniper scopes. Schmidt & Bender has product lines just for the police and military: PM, PM II, and MILITARY MK II. These telescopic feature sights are equipped with special features to provide excellent performance.

The MK II line includes PM II sights with added laser filtration lens coating. These are meant to protect users against being wounded or blinded by laser lights.

Schmidt & Bender PM, PMII & MK II are reserved for the most advanced shooters, so quality is not even questioned. However, along with quality are very high price tags.

This is the end for our article on “What scope does the military use?” and we have given you 16 names. Hopefully, this has been helpful. Let us know what you thought of the content in the comments below. And if you can, please share this with other readers!