Have you ever heard people referencing the nation’s 24 mournful notes? That’s the Taps! Unlike its cheery-sounding name, taps is largely associated with the deaths of military members and is played at military funerals. However, aside from this, taps is also played daily on military bases. Today’s article will brief you through what “Taps” is and answer the question, “What time is taps played on military bases?” We will also look quickly at its two counterparts: reveille and retreat.

Therefore, if you are interested in any of the three: taps, reveille, and retreat, continue reading!

Taps in the Military 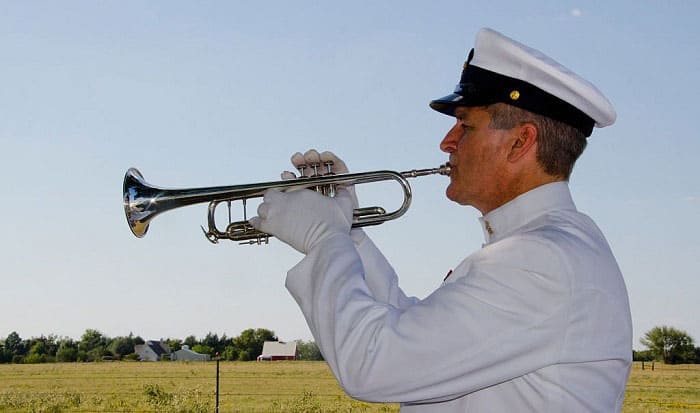 Taps is a short tune that serves as a military signal for certain events (both scheduled and non scheduled). It is played by a single trumpet or bugle. So, taps is sometimes also referred to as a bugle call.

Its melody is composed of the C major triad, which are the notes C, E, and G – the G used in the higher and lower octaves, and uses the 3rd, 4th, 5th, and 6th partials.

Since taps is a signal and not a song, there are no lyrics associated (officially). Nonetheless, there have been lyrics written to accompany it, and adaptations have been created. This set of words by Horace Lorenzo Trim is the most famous accompaniment:

Taps is one of three tunes sounded throughout the day at a military base, installation, etc. If you live near (within earshot of) a station, you will likely hear three sounds every day: a reveille, retreat, and taps.

When is the reveille played? Usually, it will sound at 6 A.M or 7 A.M and followed by the bugle call “To the Colors.” On the first note, military members will face the flag and stand at a parade rest position. If the flag is not in view, members are expected to face the source of music. Then, a salute is rendered at the first note of “To the Colors,” and held until the last note.

If you do not live within earshot of a military base/installation and are curious as to what the “To the Colors” bugle call sounds like, listen to it here.

What time is retreat played on military bases? It will sound at 5 P.M, which is typically the end of duty. Instead of “To the Colors,” it will be followed by the National Anthem. On the first note, all military members (in uniform) will face the flag and stand at parade rest. The same protocols as the reveille is applied, but to the National Anthem instead of “To the Colors.”

Taps will play at 10 P.M. You should stand still, face the flag or source of music, and keep quiet.

Next, what is the origin story of “taps?”

Taps is a variation of the “Scott Tattoo,” which was the bugle call used between 1835 and 1860. Its present form was arranged by Brigadier General Daniel Butterfield (Union Army) in 1862. It replaces the bugle used to call for “lights out” and was officially recognized in 1874 by the U.S Armed Forces.

Finally, when is “taps” played?

Taps are played during military funerals. During the sounding of taps, military members should salute and civilians should take off their headgear, placing a hand over their heart. It is meant to commemorate the memory of military members.

Listen to an example of the playing of taps at Arlington National Cemetery here.

Note: It is acceptable for non-military funerals to play taps, as well. It is better to have a live bugler rather than a recording.

Last year, taps was played at 3 P.M on CBS News “On The Road” to honor the country’s fallen heroes. It invited buglers and trumpet players all across the U.S to sound taps together. Tens of thousands of people participated. Here, taps goes beyond a military call, but also a call to unite everyone and provide reassurance amidst the pandemic.

Taps is played every year during each of the military wreath ceremonies conducted at the Tomb of the Unknown Soldier. These ceremonies are also conducted annually on Memorial Day.

Taps is also sounded at night, around 10 P.M (post meridiem) in non-deployed installations as a “lights out” call. When a “taps” is called out in this way, there are no associating formal protocols.

Boy Scouts, Girl Scouts, and Girl Guides also sound taps to indicate the end of an evening event, like a campfire. This also sends a message: silence is now expected in the camp.

Taps is played as a tradition at a few U.S military schools, including:

It is played when a former member or current member of the school’s Corps of Cadets is killed in service. Taps, on these occasions, is called the Echo Taps or Silver Taps.

As you have read, the answer to “What time is taps played on military bases?” is 10 P.M. But, the bugle sound can also be played at other times, on other occasions, like military funerals, military wreath ceremonies, Memorial Day, military school remembrance ceremonies, etc.

Thank you for reading! Hopefully, you have picked up the information you need from our article. If you have any other questions to ask or thoughts to share, please leave them in the comments below. Also, before you go, do not forget to share this article with other readers, such as your friends and families!