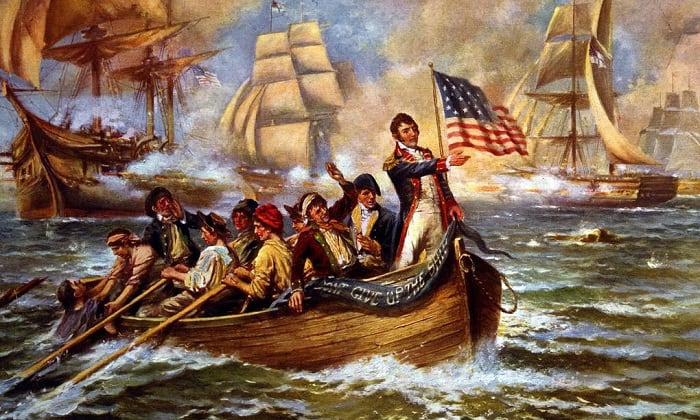 Are you studying the War of 1812 and stumping at the Battle of Put-In-Bay?

Which military action directly followed the Battle of Put-in-bay?

Don’t worry. You are not the first person to get confused.

Here is the short answer: William Henry Harrison went after the British forces that were retreating and defeated them. To learn more about the details, continue reading this article. We will brief through what the Put-In-Bay battle was, who won, and what happened after. So, make sure you read until the very end to get a complete understanding. 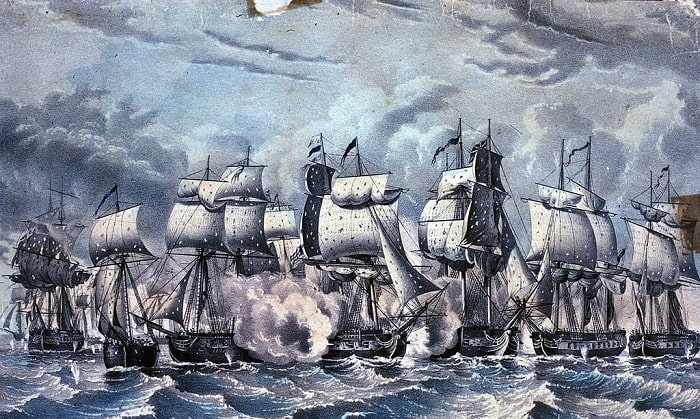 The official name of this battle is “The Battle of Lake Erie,” because it was fought on, you guessed it, Lake Eerie.

Its other name, “put-in-bay” is a nickname of the South Bass Island, among Lake Erie’s many archipelagic islands.

Here is a photo of Put-In-Bay South Bass island in relation to the U.S brig and the UK’s brig, as well as the position of the first shot during the battle. 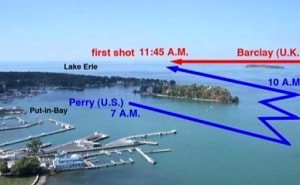 The U.S commanders for the Put-In-Bay battle were Oliver Hazard Perry and Jesse Elliot and on the other side (the UK), the commanders were Robert Heriot Barclay and Robert Finnis.

Perry had a fleet of 9 ships, while Barclay’s fleet had 6. Among Perry’s fleet were Lawrence and Niagara briggs and the names of some of Barclay’s briggs were Detroit, Caledonia, Queen Charlotte, and General Hunter.

Here is a summary of the sequence of events:

Barclay’s side fired the first shot at 11:45 AM from Detroit and its long gun assortment battered Perry’s Lawrence for 20 minutes, preventing it from responding properly. And when Lawrence finally arrived at its carronade range at 12:45, it did not shoot as well as Perry had hoped.

Even though Robber Finnist and his First Lieutenant were killed aboard, aboard Queen Charlotte, the next most senior officer, Lieutenant Irvine of the Provincial Marine, moved to brig General Hunter to go against Lawrence at close range.

Ultimately, Lawrence was quickly reduced to a wreck, and ⅘ of its crew were killed or wounded.

Perry transferred to Niagara through 1 kilometer of heavy gunfire when the final gun on Lawrence became useless and Lawrence had to surrender.

The British expected Niagara to lead the American away in retreat. But once Perry boarded Niagara, he dispatched Elliot to engage in closer action, while he broke through the British line, causing Detroit and Queen Charlotte to surrender at about 3:00 pm.

What Were the Results?

The U.S took the victory.

The British under Henry Patrick Procter were preparing to abandon their positions, beginning with the positions in Amherstburg and Detroit. On September 27, they tried to retreat up the Thames River.

But William Henry Harrison, one of the commanders of the War of 1812, chased up the retreating force and defeated them. More specifically, this was on October 5, during the Battle of the Thames.

The U.S retained control over Lake Erie for the rest of the war. It contributed to much of their successes in 1814 on the Niagara peninsula. And it also helped the U.S eliminate the risk of a British foray into Ohio, Pennsylvania, and Western New York.

The U.S Lawrence and the British Detroit and Queen Charlotte were the most battered and originally converted into hospital vessels.

Later, the Detroit and Queen Charlotte were shattered and reduced to hulks while the Lawrence was restored to continue to serve.

In 1875, Lawrence was moved to Philadelphia to go onto the display at the Centennial Exposition 1876. But in the same year, it burned when the pavilion housing went aflame.

Niagara was raised and restored a bit later than Lawrence (1913), but was soon disassembled. Now, some parts are in a reconstructed Niagara displayed in Pennsylvania.

Who Was William Henry Harrison? 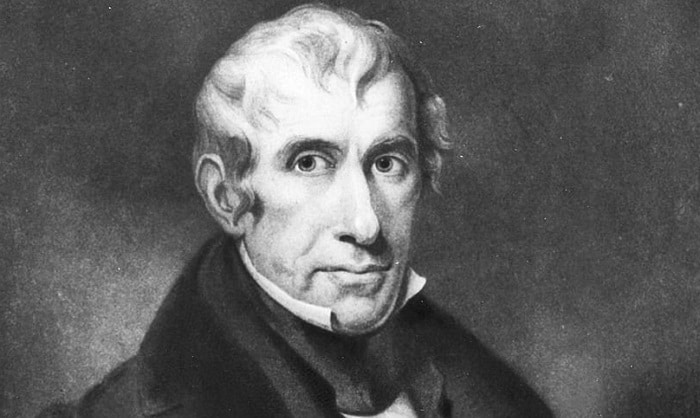 Early Military Career: Harrison took part in the 1794 Battle of Fallen Timbers, and later led a force against Tecumseh in the Tippecanoe Battle.

Harrison was the Army commander for the U.S following the Detroit siege. Before this, he was already in conflict with Tecumseh, who sided with the British.

His order was to retrieve Detroit, but he initially held back and constructed defense positions because he was outnumbered.

When he had reinforcements in 1813, he took the offensive and guided the Army northwards to battle. He won in the Indiana Territory and Ohio and fulfilled his original order: retrieving Detroit.

At the Battle of the Thames on October 5, 1813, he defeated Procter’s retreating force and invaded Ontario — Upper Canada. This was one of the greatest victories in the war, granting him a national reputation.

Much later, in 1841, he became President. He was the U.S’s 9th President and was in office from March 4, 1841 to April 4, 1841. He succeeded Martin Van Buren and was succeeded by John Tyler. He had fallen ill and passed away.

Until Ronald Reagan, Harrison was the oldest person (at 68) to become the U.S. president. But Harrison actually ventured into politics way before his presidency. His political career started in 1798.

If you have any other questions or thoughts, please do not hesitate to leave them with us in the comment section below. Otherwise, share this article with other readers like your friends and family members! We would really appreciate it!