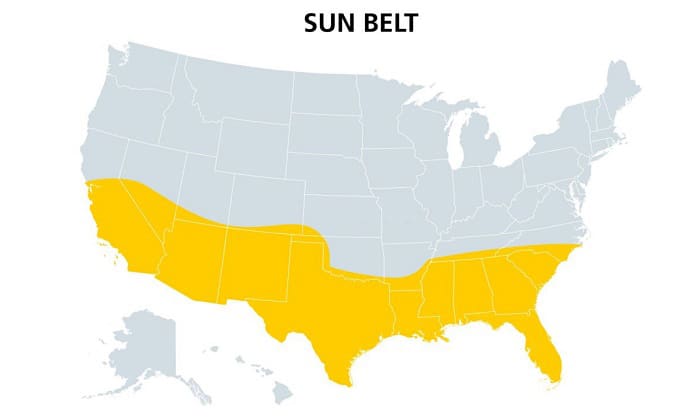 If you are studying for a U.S History quiz, you will likely come across this question, “Which region of the United States attracted migrants to its defense industries and military bases?”

The answer is the Sun Belt region, which stretches from the Southern to the Southwestern portions of the country. It includes several states which houses major cities. The population in the Sun Belt region increased rapidly after World War II when military manufacturing jobs came from the Rust Belt region.

You can get the full mark if you know this. But to prepare for other questions on the topic, we suggest you keep reading. More details will be uncovered below. So, read until the end! 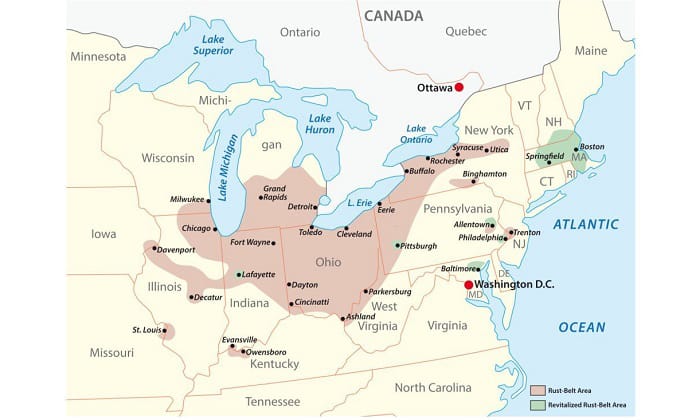 What Are The States in the Sun Belt Region?

The Sunbelt region includes the Southern and Western states.

Today, there are 19 states.

However, back then when migration occurred, these were the states that were a part of the region:

What Are The Major Cities in the Sun Belt Region?

Major U.S. cities within the Sun Belt region are:

A related question is, “Which city is in the Sun Belt apex?”

The answer is Huntsville in Alabama. Here it is on the Alabama map:

What Is The Rust Belt Region?

This is a loosely-defined region with parts of the Midwest and Northeast. In the mid-20th century, it was the United States’ manufacturing center. However, towards the end of the century, jobs were exported to countries in Latin America and East Asia, where labor was cheaper.

This region originally rose to prominence during the 1930s and 1940s. As the country was mobilizing for World War II, it had two things that simplified large-scale production:

Despite having no official boundary, there are several states that still have rusted buildings that indicate their ‘membership’ of the region. The states are:

What Is The History of The Sun Belt Growth After WW2?

During World War II, millions of Americans were mobilized to work in factories producing aircraft and military equipment. Following the war, the United States saw the opportunity to produce and sell goods to European countries that were rebuilding their cities.

During the 1950s and 1960s, the United States became one of the leading manufacturing countries in the world. A large share of the production took place in the Midwest and Northeast — the (later) Rust Belt.

However, during the 1970s, there was a period of economic uncertainty. The country’s debt rose while the dollar value dropped. The latter meant that it was more costly for manufacturing companies to employ Americans.

As a result, the American steel industry’s employment plummeted. It was from over 500,000 in 1973 to less than 240,000 by 1984. Jobs were instead fulfilled by foreign countries, where labor was cheaper.

Once there were no more jobs, unemployed Americans had to look elsewhere to support themselves. They moved south into the Sun Belt region in hopes of finding work.

Without the manufacturing industries in the Rust Belt, these states were able to accommodate the new industries (aerospace industries, defense industries, tourism, etc.) that were emerging thanks to greater government spending and technological development.

New businesses like aerospace and oil also moved to the Sun Belt as there were fewer labor unions.

Later, the invention of effective and affordable air conditioning (which made the weather in the Sun Belt states more manageable) and the movement of retirees from Northern states invited even more people to the region.

Milder winters in the region also made it appealing. Many saw that there were no cold winters and it was mostly comfortable year-round;.

By 1990, cities in the Sun Belt region like Dallas, Los Angeles, San Diego, and San Antonio had blown up in size. They were among the ten largest in the country.

Eventually, the Sun Belt region became THE area for growth and economic prosperity in the country. It was now attractive to not only Americans but also foreigners, such as Mexicans. Many of the latter then immigrated into the area.

As a result, Sun Belt migration revived the southern area in the United States.

What Does The Name Rust Belt Mean?

The name Rust Belt comes from the image of the factories that once accounted for thousands of goods a day now “sitting to rust.”

What Does The Name Sun Belt Mean?

The name “Sun Belt” was given to the region because of its hot and sunny climate. It is believed to have been coined by writer and political analyst Kevin Phillips in 1969. He used it in his book “The Emerging Republican Majority” to describe the region. Afterward, it became widely used.

Which Migration-Related Problem Was the Sun Belt Experiencing?

The Sun Belt had tremendous growth, but this was not without problems. In the 1980s and 1990s,

However, its large cities are still some of the fastest-growing in the country.

For instance, Nevada is among the U.S’s fastest-growing states due to immigration.

From 2000 to 2008, the top fastest-growing area was the West. There was a population change of 12.1%! Following behind is the South, with a change of 11.5%. Thus, since the 1960s, the Sun Belt has remained one of the most important growth regions in the country.

Now, you know the full answer to, “Which region of the United States attracted migrants to its defense industries and military bases?”

The Sun Belt region, stretching from the Southern to the Southwestern portions of the country is the region that attracted migrants. There was in-migration and out-migration following the Second World War.

The key factor contributing to this was people moving to seek opportunities in emerging industries, like aerospace, defense, tourism, and oil. Other pull factors were the invention of air conditioning, which made the sunny climate more manageable, the retiree movement, and the more favorable mild winters.