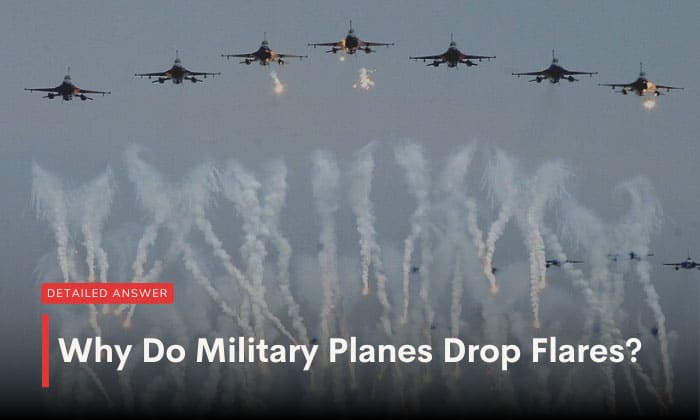 If you have seen military planes soaring in the sky, you have probably also seen the vibrant light and smoke tailing them. These come from flares, and they have actually hit the headlines many times. But do they have any specific purposes?

In brief, the military uses them to illuminate, send signals, and counter targeting systems, such as air-to-air missiles and surface-to-air missiles. There is more, though. Keep reading to find the full answer to, “Why do military planes drop flares?” and other relevant details. 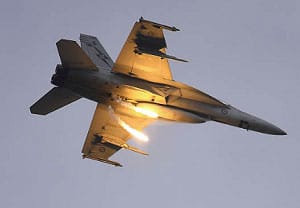 Flares emit extremely bright light, so it is not a surprise that they are used to amplify visibility in the military during low-light conditions.

For the purpose of illumination, flares function like a flashlight that stays in the air. They make it possible for military members to carry on as they would in normal lighting. This makes sure that landing operations are always completed safely.

About a hundred years ago, the military used “landing flares.” These were essential candles that were fixed onto parachutes to assist planes with landing in the dark. They would provide roughly 40 thousand candle power for 4 minutes. 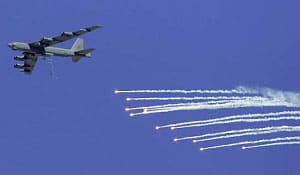 Plane and jet flares can also be used for signaling intentions. Since they give off light and heat, they can be used for marking specific spots. Depending on the type of flares, there can be smoke as well.

Members of the military might fire flares to signify boundaries of a training area so aircraft practicing with live weapons will not accidentally venture off and cause damage to civilian zones.

Besides physical boundaries, flares can additionally be used to mark time. For example, they can be popped off to denote the start or end of military activity. On top of that, flares can be used to reveal enemy stations, units, routes of movement, etc. 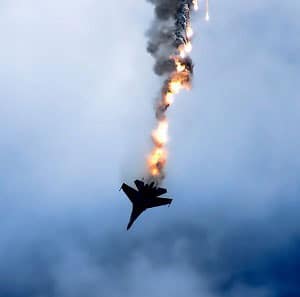 The third reason the military uses flare is to mislead targeting systems. This is also why flares are sometimes called lures or decoys. In essence, they serve as baits for heat-seeking missiles.

When flares are ignited and ejected from military aircraft, they give off temperatures a thousand times higher than the aircraft’s exhaust. As a result, the flare will fool heat-seeking weapons and lure them away from the aircraft.

In this case, the flare will burn for a short period of time, typically 10 seconds. Even though this might sound trivial, they can be the “hero” that saves an aircraft from being shot down in combat. 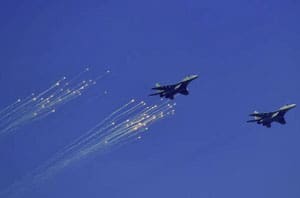 Planes and helicopters drop flares for air shows and military displays too. While this is not as common as the reasons outlined above, it is still worth knowing. Flares produce brilliant light and smoke that can deliver an impressive sight. Thus, on special occasions, they can function as a means to “show off” military capabilities. 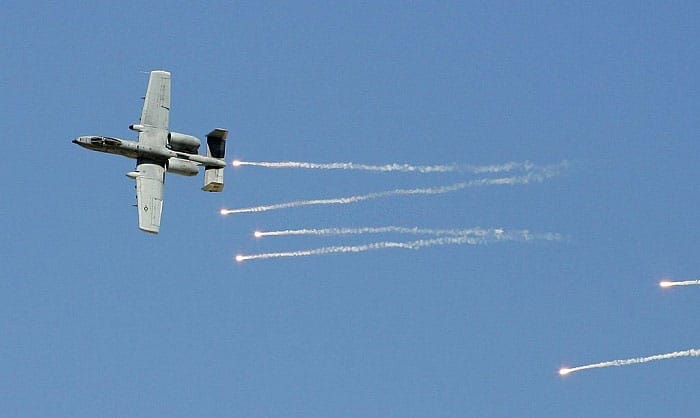 Are chaff and flares the same?

Chaff, like flares, is used as defensive countermeasures by the military. They are both deployed by aircraft to confuse and divert.

However, they are made differently. The composition of chaff includes metalized glass fiber, plastic, or aluminum. On the other hand, flares are often made of magnesium – a hot burning metal.

Another difference is that chaff works against radar-guided missiles, while flares counter heat-sensing ones.

What are flares made of?

The specific components depend on the flare type. However, most flares are made of magnesium. The flare case would be made of aluminum or foils of nickel, iron, or steel.

Do flares work against missiles?

Yes, flares serve as missile countermeasures. They trick the missiles by emitting higher temperatures than the aircraft from which they are launched and potentially “take the hit” instead. These effectively work against missiles by creating confusion.

How many flares does a fighter jet have?

This depends on the type and size of the fighter jet. For instance, a fast jet would have 30 flares, whereas a bomber aircraft can contain up to 99 in their cartridges. You’ll have to look up the model of the jet to learn the exact number of flares it can carry.

Let’s use the stealth aircraft F22 as an example. As you already know what model it is, it’s easier to learn that the answer to “How many flares does a F22 have?” is 50.

Similarly, anyone wondering, “How many flares does an AC-130 have?” will have no difficulties finding the exact number—180, with 30 flares divided equally in 6 dispensers.

Are flares used outside of the military?

Yes! Flares are also used by civilians. They are the go-to device for distress signaling, especially in maritime settings. In this case, though, they are ignited from the ground. They might also be fired from a flare gun or tube. You can find these in survival marine kits.

There are flares specifically made for roads, highways, and railroads as well. These are referred to as fusees rather than flares, though. They are meant for emergency use, and they burn for a long longer. In most cases, they last for 30 to 60 minutes.

Flares are sometimes used informally (and illegally) by people at special events, like sports games and festivals. Since they can produce brilliant light, they are used to spruce up the atmosphere.

Now, you know the complete answer to “Why do military planes drop flares?”

To recap, there are four reasons why:

Hopefully, this blog post has been useful. If you have anything else to share on this topic or have follow-up questions, please leave them in the comments down below. We would love to hear from you.