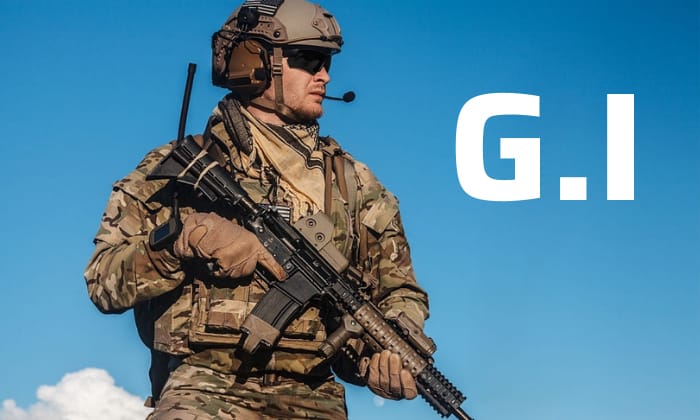 Welcome back! Today, we have another article on military lingo and jargon. The word in our discussion is GI. Have you heard of this before? It is not as common as other terms and phrases, so it is difficult to catch in military films, books, or video games. Nevertheless, it is a term worth knowing.

There are actually several GI military meanings. It can be interpreted as a government issue, general issue, ground infantry, or galvanized iron. You may also hear the term GI Joe, or find it in titles of films and books. As such, there is certainly more information to each of these meanings of GI, which we will explore here. So, continue reading to find out what does GI mean in the military! 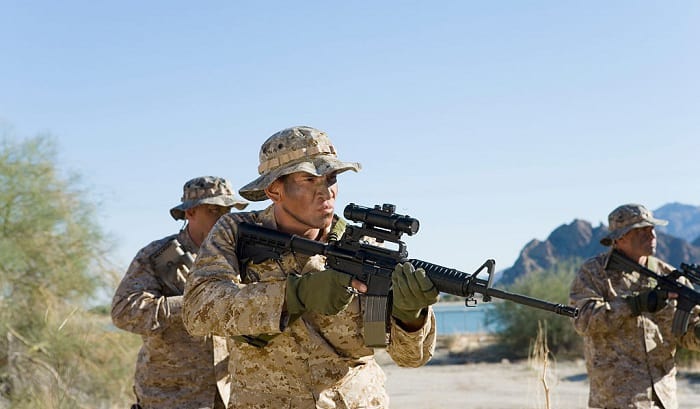 The GI definition is not absolute. Instead, GI refers to a number of military things: government issue, general issue, ground infantry, or galvanized iron. There are also other references like GI Joe and occasional appearances of the term in Hollywood films as well as books, which we will explore towards the end of this article.

Each source will tell you something different, so we have curated all the sites with their interpretations here for you to consider. In summary, we will be looking at three sources: Wikipedia, the Merriam-Webster dictionary, and the History Channel site.

According to Wikipedia, back in the First World War, U.S soldiers referred to the artillery shells from Germany as GI cans. Therefore, during this time, GI was interpreted as government-issued or general-issued soldiers and airmen equipment. Some users on community forums also say that GI is defined as “government issue” in basic training.

Later, in 1940 and 1941 when the Selective Service System arrived, it substituted the term “doughboy” that was commonly used in the war.

In the British military, GI means gunnery instructor, which is an NCO in charge of inducting and training recruits.

Based on the Merriam-Webster dictionary, GI can be used as an adjective and noun.

As an adjective; GI describes items that

On the other hand, as a noun, GI is a member or ex-member of the US armed forces.

In other cases, GI can also be used as an adverb or verb. As an adverb, GI is meant to refer to a strictly regulated manner, and as a verb, GI is to clean thoroughly to prepare for or as for a military inspection.

By the same token, you may have heard of a “GI Party”. However, it is not as fun as you will assume parties to be.

Sometimes, a military facility will host a “GI Party”, and this is essentially when members have to clean up. It is often held before a barracks inspection. But it can also happen simply because officers realize that facilities are messy and not well-kept. Watch more about these GI parties in this Youtube video here.

The History Channel puts forward another popular theory that in the early 20th century, GI was labeled on military buckets and trashcans. This was then understood to be an abbreviation for the material of the items: galvanized iron.

A second theory talks about the use of GI in World War 2, where military personnel called themselves and each other GIs. A lot of the servicemen used it with a negative connotation, in which they saw members being treated as mass-produced and simply standardized products of the government.

It is said the Dave Berger, a cartoonist who was drafted into the Army coined the name GI Joe in his comic strip, later published in weekly military magazine Yank 1942. So, GI Joe was also often used to refer to members in service.

The name was carried on to 1964 when a U.S toy company called Hasbro released a military action figure “G.I. Joe” for boys.

Before that, in 1944, the Servicemen’s Readjustment Act was signed by President Franklin Roosevelt. This became known as the GI Bill.

It provided benefits, such as home loans, unemployment insurance, and college funding, for veterans returning from World War II.

However, a lot of military brass are not fond of the term. The American Heritage magazine once reported an incident where General Douglas MacArthur condemned Col. Roger O. Egeberg for casually calling troops GIs, “Don’t ever do that in my presence…Call them soldiers.”

Many books also feature “GI” in the title, such as A G.I. in The Ardennes: The Battle of the Bulge by Denis Hambucken, There’ll Come a Day: Letters from A G.I. Paperback by Jane Hagedorn, G.I. Hollywood by Lila McLaughlin and George Mannix, The Rise of the G.I. Army, 1940-1941: The Forgotten Story of How America Forged a Powerful Army Before Pearl Harbor by Paul Dickson, and G.I. Dogs: Sergeant Stubby, Hero Pup of World War I by Laurie Calkhoven.

Hopefully, you were able to get a lot of information from this article on “What does GI mean in the military?” Although the GI definition is ambiguous, you now know the different possible interpretations for it.

Which one do you think makes the most sense? Why? Let us know in the comments. We cannot wait to hear from you! Do not forget to share this article with your friends, family, and anyone you think will appreciate or benefit from the content.