If you are a fan of military books and films, you will know that red light is quite common in bunkers, mines, and submarines. A lot of military gear is equipped with red flashlights or red lenses. Even though red is a nice color with seemingly good connotations, the use of red light in the military is mostly because of practicality. Surprising, right?

Today, we will answer “Why does the military use red flashlights?” Are you ready to join us and find out? We will take you through the three reasons why red flashlights are used in the military: to improve or preserve night vision, minimize light profile, and send signals. Make sure you read all the way until the end to catch all the details!

The Military’s Use of Red Flashlights (3 Reasons) 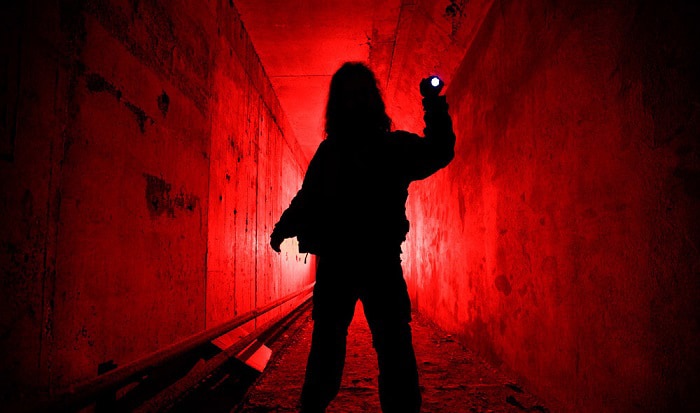 As mentioned earlier, there are three main reasons why the military uses red light. We will uncover each of them in detail below. So, go ahead and keep reading!

Military personnel frequently work into the night. He or she may be on patrol or lookout, for example, and will need a reliable night vision to complete the task well. In this case, the personnel will use red light instead of the traditional white light. Why? There’s a lot of science behind this but long story short: the eyes are less sensitive to red light and will therefore not shut down suddenly going from a light setting to a dark setting.

Here, the “light setting” refers to having a flashlight on and the “dark setting” is when it is off. In other words, the eyes can more quickly adjust to the darkness after turning off red light as opposed to white light.

For this reason, most members of the military use red flashlights and red headlamps. The red color is supposed to be less harsh on the eyes and improve night vision. Red light also does not cause blinding light spots, which can create damaging time lags.

A white light, on the other hand, will be too bright for most night vision equipment. Given this, a red flashlight is better for you and the immediate people around you, such as the fellow soldiers by your side during patrol or lookout.

The second reason red flashlights are preferred in the military is to minimize a person’s life profile. What does this mean exactly?

Basically, with a red light, you will not as likely be noticed or “picked up” by the enemy. However, this is only true if the distance is taken into account. Red does not travel as far as other colors, so it is more tricky to see it from a distance, especially if the light is dim.

A red flashlight will signifIcantly lower your light signature, which makes it more challenging for others to spot you. This is why a tactical flashlight with red light is so common. In essence, concealability and stealth are more guaranteed with red light.

This is especially important when a military member has to stop somewhere to read a map or set a stakeout at night. The red light allows him or her to continue the duty or navigate with minimal chance of being seen.

Red light is sometimes used as a means of signaling to fellow military members. It is a way of indicating that you are not the enemy. As such, there are plenty of red lens flashlights in the Army. You will not have a problem finding them in to-go gear kits.

Even though this sounds unnecessary, it is actually very important in the military. Since a lot can happen in just a blink of an eye and personnel are trained to react immediately in response to any movement, it is much easier to shoot/fire at “one of your own” than you might think. But this use of red light is not as prevalent as the other two that we have mentioned.

Red light as a signal also occurs in military aviation light systems. The signal lamp used in the event of an aircraft radio failure can feature red light when directing the aircraft.

In addition, you may know of the red light on other occasions, such as distressed flares, beacons, and signals. These are usually red to alert an emergency call or “SOS”. They are mostly used in a maritime context. For more information, check out this short video.

You can share with others that the red light is to preserve or improve night vision, minimize a person’s light profile, and send signals. These three reasons are also why the police use red flashlights, and others who work in the dark, like miners and hunters, use red light.

Do you know of any other reason the military uses red flashlights? If yes, let us know in the comments! Also, feel free to reach out to us about any queries you might have on this topic. We always look forward to catching up with our readers. You are very welcome to share this article’s content as well!