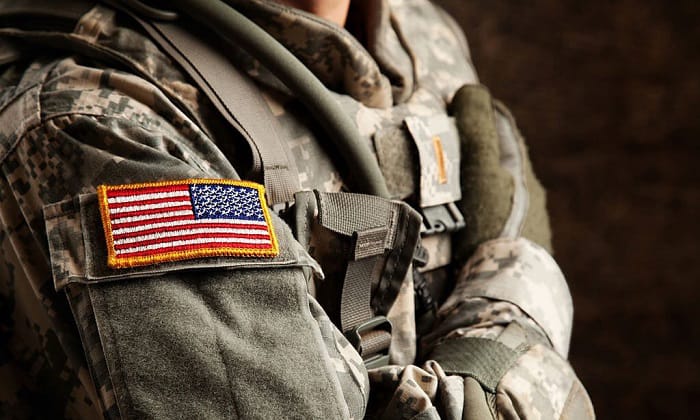 There are a lot of different components of a military uniform, regardless of whether it is a combat or a service dress one. One of the components is a name tag, which can also be referred to as a name tape or name plate.

The essential thing to note with a military uniform name tag is its placement. More specifically, what side does your name tag go on in the military? Is it the left or right?

The short answer is the right. But there are more details you should know and remember. We will discuss all the details below. So, read on.

This is the standard utility uniform for training. The ACU name tape placement is on the right breast. You can see an example of it here: 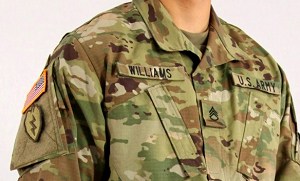 The Army uniform name tape placement is similar to that of the ACU. The name tag is worn centered on the flap of the left pocket. In addition, it needs to be equally spaced between the top of the pocket and the top of the button.

Here is an illustration of where the name tag goes on an Army green uniform for men: 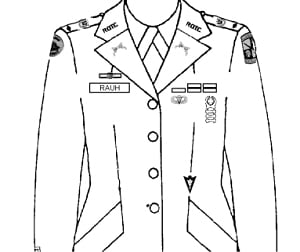 The name tag is worn roughly 1 to 2 inches above the top button. It must also be centered horizontally on the wearer’s right side. Here is what the Army name tape placement should look like:

The USMC name tag goes on Service and Blue Dress uniforms when they are worn as the Uniform of the Day. They cannot be worn on the female white shirt and while the wearer is on liberty or leave.

The name tag is 5/8 inch by 3 inches and black. It is engraved with the wearer’s last name in black-type. The engraved letters are about 3/8 inches high and 3/16 inches wide, though smaller letters are permitted for wearers with longer names.

The name tag must be worn centered 1/8 inch above the breast pocket on the right. On uniforms without a right pocket, it should still go in the same general location. For female uniforms with slanted pockets, the top of the pocket is the highest point touching a horizontal line.

The military name tag placement for Navy uniforms is 1/4 inch above the breast pocket on the right. It should be centered as well.

If the uniform does not have a right breast pocket, the name tag can go on the right front, corresponding to the ribbons on the left.

The name tag is rectangular and under 1 inch by 3 1/2 inches. It may be in any color but it has to be standard throughout the command.

The Navy also has two other types of name tags. They are

The velcro-backed leather name tags are 2 inches by 4 inches and are made of plain black leather. The wearer’s name, rank or rate, and duty status (USN) are embroidered on it. The lettering is in gold for officers or CPOs and in silver for E1 to E6 personnel.

The unit specific embroidered fabric name tags are 2 inches by 4 inches as well. Their edges are embossed in gold, which match the block letterings. You can find the wearer’s name, middle initial, last name, and duty status (USN) on the name tag. In the top field, there is also a gold warfare breast insignia.

For the Surface Warfare Officer (SWO) leather jacket, the name tag is worn using hook and loop tape on the left side of the wearer. It can be a standard name tag or a unit specific embroidered fabric name tag.

On the NWU, the name tag is worn centered on the right pocket 1/4 inch below the Command insignia. It is made of fabric and also called an identification marking on the Navy uniform wear guide. You can find the wearer’s surname sewn on it.

The USAF name tag is worn on the Service Dress Class A for women and Blue Service Class B uniforms. It is also worn on the Maternity Dress uniform and the Long-Sleeve Maternity blouse.

Female personnel wear the name tag centered on their right and ~1.5 inches higher or lower than the first button to their left.

There is also a name tape on the back of the uniform’s patrol cap. The name tape that goes on the OCP Air Force patrol cap is embroidered with spice brown thread and sewn on or attached by Velcro. Here is an example of it: 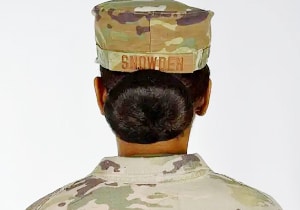 Here is a photo to help you visualize the OCP name tape placement: 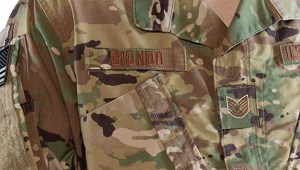 Like their counterparts in the Army and Air Force, those in the Space Force wear OCP uniforms.

They will have to wear name tapes along with their insignias, patches, and badges. The name tape has to be sewn on or attached with Velcro. It will be on the right and on their patrol caps. Unlike the name tapes of Army and Air Force OCPs, the Space Force’s name tape letterings are in blue.

A name plate is also worn with Service Coat and Service Blues. It is a silver hexagonal plate. The lettering is in blue, like the name tape on an OCP. Here is an example: 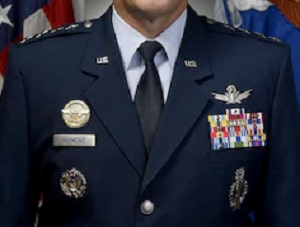 The U.S Coast Guard has cloth name tapes. These are approved for optional wear on both long and short sleeve dark blue work shirts.

The cloth name tapes come into two parts: a ‘NAME’ part and a ‘U.S. COAST GUARD’ part. It is important that both are worn.

The two parts should be placed at the same height and using blue thread. There should always be at least six stitches per inch.

There should be white block letters on the cloth name tapes, and they should be no less than 1/2 inch high and no larger than 3/4 inch. The background color should match the working blue shirt material.

Where is the name plate worn on your uniform?

As mentioned above, the nameplate is generally worn on the right of a uniform.

What side do military patches go on?

Unlike the name plate, name tag, or name tape, military patches can go on both sides of a uniform. Most commonly, they are positioned on the sleeves.

Here is an example of where military patches go on an OCP Army uniform:

What side does name tape go on OCPs?

To reiterate the information above, the name tape on OCPS goes on the right side.

Now, you know that the answer to, “What side does your name tag go on in the military?” is right. It is on this side for combat and service dress uniforms across service branches. However, there are slight differences in the detailed placement and associating regulations.

Hopefully, this has been informative and interesting. If you know someone who is looking for the answer to this question, share our article with them! Also, leave any thoughts or questions you have down below!