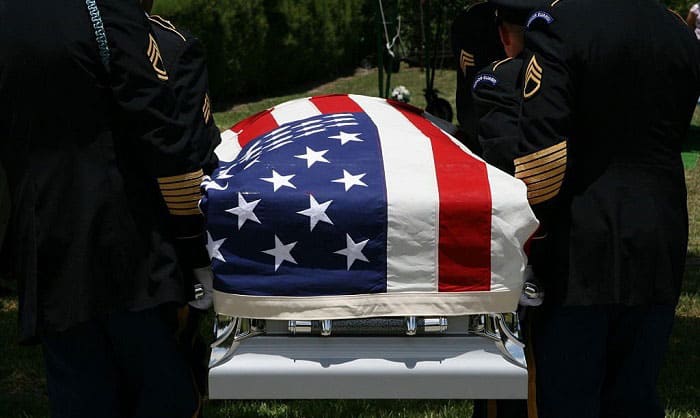 Like other military ceremonies, it is incredibly crucial that you know how to act appropriately at a military funeral. If you are about to attend one yourself, you will find the information in this article very helpful. All the essentials on military funeral etiquette are curated here.

We will answer 4 key questions, which are the most common among military funeral attendees:

In answering the above questions, we will cover everything you might want to know about this topic of military funeral protocols. Therefore, make sure you do not stop reading until you reach the end! 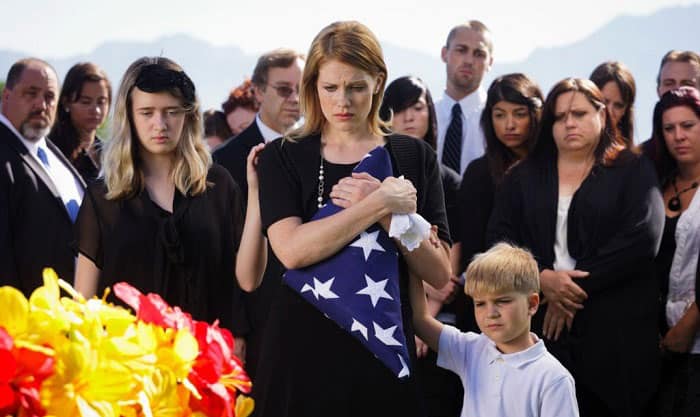 When to salute at a military funeral?

To answer this question, we will first brief through the military funeral procedure. Here are the sequence of events:

As you have read, it is necessary to salute when the funeral coach/caisson arrives, and when the casket is lifted by the casket crew. Other than that, military members should do military funeral salute when:

Speaking of head gear, you may want to know what to wear to a military funeral. The following section will give you some guidance.

What to wear to a military funeral?

The number one priority is respect. All attendees should be dressed respectfully. Both military members and civilians should avoid casual clothes, such as T-shirts, jeans, and sweaters.

The latter (military personnel) should be dressed in their uniform (Class – A) or dress uniform. It is not appropriate to wear a battle dress. Also, make sure that your uniform has all the decorations, badges, medals, ribbons, and insignia. You do not have to wear white gloves unless there are set instructions by your installation or commanding officer. It is also optional to add a brassard — a straight, 2-inch x 4-inch plain black band to the left sleeve, between the elbow and the shoulder.

Note: If you are an active personnel, it is best to follow the commanding officer’s directive. Adversely, If you are a retired servicemen/women, you may wear uniforms with the insignias and rank that you held when you retired.

While the former (civilians) should be in formal mourning attire, it is best to stick to dark colors. For men, suits are recommended. Otherwise, a dress shirt, slacks, and a tie.

On the other hand, women are expected to wear a suit, dress, or combination of skirt and blouse. As for footwear, be sure to wear something that looks nice and is comfortable at the same time. You can wear some accessories, but avoid bangle bracelets and necklaces that can make a lot of noise.

Note: A good tip is to dress as if you are going to a traditional church service.

Who gets the flag at a military funeral?

As mentioned earlier in the first section, the military flag is presented to the next of kin, who is the most closely related person to the deceased. The recipient of the flag can preserve it in their house for display. Usually, it is framed and hung up on a wall. But there is also an option to donate it for national veteran events.

Note: By age means the oldest to the youngest

You also can check this post to see more details!

What to say at a military funeral?

There will be specific times to speak at a military funeral. The most notable is when the flag is presented to the next of kin by the chaplain. The chaplain will say, “As a representative of the US military, it is my high privilege to present to you this flag,” along with condolences. They might also say, “Let this flag be a symbol of the appreciation this country feels for the service rendered and to our flag by your loved one.”

If you want to send your own condolences to the family members of the deceased, here are some things you can consider saying:

If you have any other questions to ask or thoughts to share on this topic, please leave them with us in the comments. We would be glad to hear your input. Please help us share this with other readers, such as your friends and family members, as well.