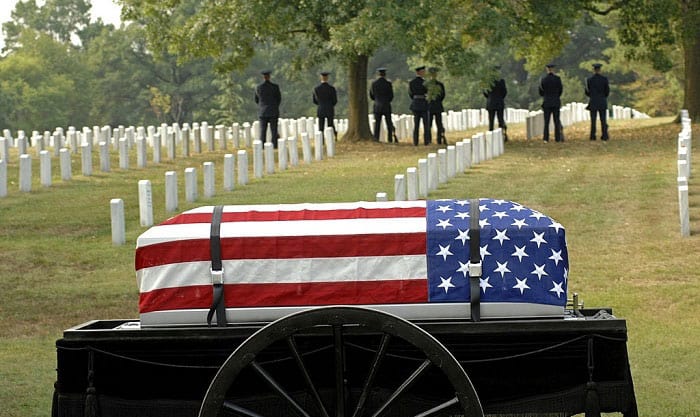 “Who gets the flag at a military funeral?” This is a common concern among those who are about to or are arranging a military funeral. In order to honor your veteran properly and give them their well-deserved ceremony, it is important to understand the essentials of the military burial flag.

Flags have long been a very meaningful part of military burial funerals. The tradition involves draping a U.S flag over the casket of the deceased veteran, performing the folding ceremony, and gifting it to the next of kin.

The flags themselves represent the fallen soldier’s honor and sacrifice. They are gifts to the families of the deceased military members on behalf of the Armed Forces and the President.

Read on for more information on the military funeral flag etiquette. 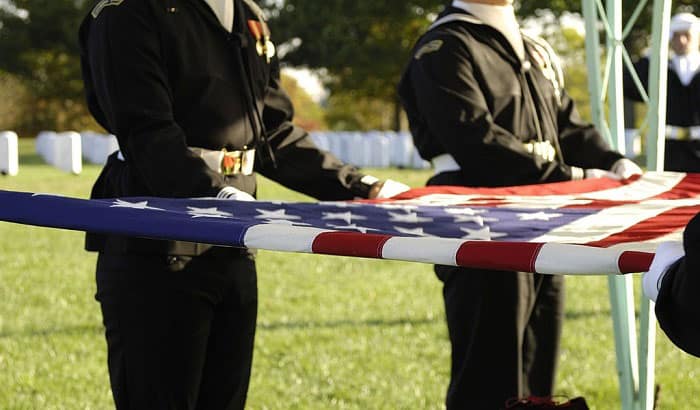 What is a military burial flag?

A military burial flag is a flag that is given to a deceased veteran to honor the memory of his/her service.

What is the military funeral procedure?

When a military soldier passes away while in service, the military will have designated notifers visit the fallen soldier’s family and next of kin to offer the flag. Usually, it will be an officer, and he/she will say, “Your son/daughter fought bravely, please accept this on the behalf of the U.S Armed Forces and the President of the United States.”

Then, the military and family will arrange the military funeral together. The next of kin is presented the military burial flag during the funeral after a folding ceremony is held.

The official 5’ x 9’ x 6” flag is made of cotton and not for outdoor display (Because of its size and fabric, it can easily be damaged by weather). It is a decorative but symbolic token of service to be preserved and cherished.

Why is a flag presented at a military funeral?

To honor the memory of deceased veterans’ service, the U.S Department of Veteran Affairs furnishes a burial flag for him or her. Specifically, veterans who:

Who receives the flag at a military funeral?

The next of kin is the most closely related person to the veteran. After receiving the flag, the family members preserve it for display in the house. Typically, it will be framed and hung up against a wall. Some families may decide to donate the flag for national veteran events like Memorial Day.

How Is the Next of Kin Decided? 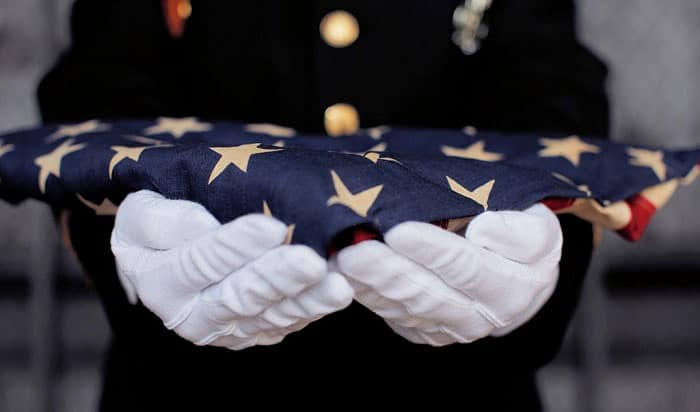 The next of kin was appointed by the active-duty members themselves prior to deployment. Hence, there is generally no dispute on who the flag recipient will be.

It the next of kin passes away before the military member:

If the next of kin designated is not available to receive the flag:

The military will consider the following order of succession for receiving the burial flag to determine the flag recipient:

If none of the above-listed relatives are available:

Another close friend or family member gets the flag at a military funeral.

Who Gets the Flag After the Next of Kin?

There are no ownership laws for funeral flags. When a next of kin receives the burial flag at a military funeral, it is theirs to keep for life and they can give it away or pass it to anyone they wish.

If the person dies, and the flag has not “changed hands”, it will not be passed down through the deceased soldier’s family. It legally will still belong to the person who received it at the funeral.

What Happens in the Military Burial Flag Ceremony?

The military burial flag ceremony is a token of appreciation for both the deceased veteran and his/her family as both have made a sacrifice for the country. The funeral carries out as follows:

Can You Replace a Military Burial Flag?

The law allows the military to issue one flag for a funeral. It cannot be replaced even if it is lost, destroyed, or stolen. So, it is very important to keep the flag safe once you have received it. Most families will put it in a glass frame or a shadow box. Here are a few photos for you to visualize:

Note: If you really want to replace your lost, destroyed, or stolen military burial flag, you may opt for seeking help from veterans organizations or community groups that may be able to help you get another flag.

The national cemeteries of the Department of Veterans Affairs display an Avenue of Flags on patriotic holidays and special events. They fly burial flags donated by the families of deceased soldiers. This is a unique but visible way of tributing all of the nation’s fallen veterans.

The donor will receive a “Certificate of Appreciation” for providing the burial flag. For more detailed information, though, it is best to contact the cemetery directly.

Now, you know the complete answer to “When a veteran dies, who gets the flag?” You also know the details of what happens in a military burial funeral and other information on the burial flag. We hope that you have found this article on who gets the flag at a military funeral helpful. If you still have any questions, please leave them in the comments below. We will try our best to address all of them!