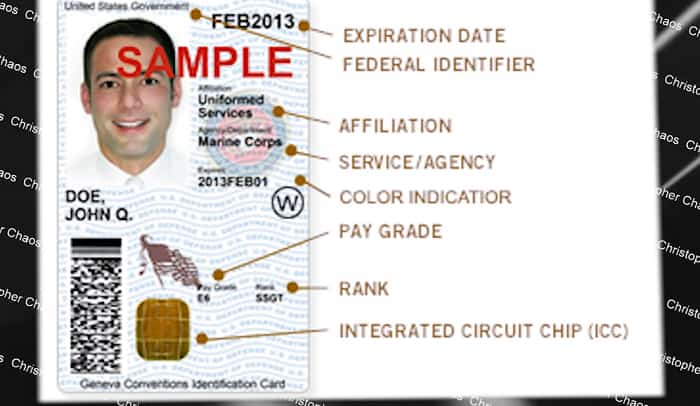 How to spot a fake military ID card is a recurring topic on Reddit. As disappointing as the implications may be, it is still noteworthy that people are taking measures to prevent imposters. In this article, we will show you five steps to recognize a fake military ID card. So, you can arm yourself against frauds. Read closely!

Step 1: Know The Types, Who They Are For & What They Look Like

There are many types of military ID cards, so it is crucial that you know them all. You should have an idea of what they look like and what their key features are.

Most fake military ID cards look completely different from actual cards because imposters rely on the fact that people outside of the military do not know what a real one looks like.

The standard ID card for members of the active duty force, Selected Reserve, and Department of Defense is the Common Access Card (CAC). It is about the size of a credit card.

The CAC is meant to give cardholders access to secured networks and systems and document affiliations.

There are four main types:

This card displays the cardholder’s branch of service.

Cardholders include those in the:

This card is for civilian employees, contractors, and affiliates who are granted access to DoD installations and systems. In detail, cardholders are:

This is for civilians accompanying the Armed Forces, such as emergency-essential civilian employees and contingency contractor personnel.

This card grants benefits and privileges to civilian employees, contractors, affiliates, and other personnel, such as:

There is a color coding system for the Common Access Cards.

Common Features of a CAC

On the front of the card, there should be:

On the back of the card, you should find:

Here is a picture sample of the card:

Aside from the CAC, there is the Next Generation Uniformed Services ID (USID) Card.

This is an ID card for military family members and military retirees. It provides access to service benefits and privileges. Starting on July 31, 2020. The card will also be issued to eligible individuals based on DoD’s policies.

There are three types:

This is for members of the Individual Ready Reserves and Inactive National Guard. Civilian non-combat personnel who are not eligible for the CAC but are deployed to accompany military operations overseas can also have this card.

This card is for dependents of:

as well as surviving dependents of:

Non-U.S Citizen sponsors and their dependents have a blue color indicator, while white is reserved for current and former Uniformed Service Members, their Dependents, and all other personnel.

The new cards are printed on a plastic cardstock and look like this: 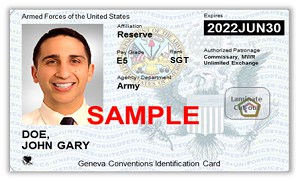 But the old ones (which are still valid until their respective expiration dates) have a different design. Here are the types:

Step 2: Do A Visual Examination of the Card

Take the card and do a general visual inspection of it. Look at its overall appearance, fonts, coloration, and key features. Here are the red flags of a fake U.S military ID card:

Skim through the prints on the card. If there are multiple different fonts on the card and the color patterns look oddly inconsistent, there is a good chance the card is fake. Also, check to see if there is any smudging or bleeding of the colors on the card. A real military ID card will not have either of these.

A real military ID card will not have spelling mistakes or typos. Therefore, if you notice these, your card is probably fake.

The picture on the card should be a portrait photo showing the cardholder from the front view. It should also be against a plain white background.

Hence, if the photo on the card you are looking at has the person facing the side or there are items in the background, there is a good chance the card is fake. The person carrying it might have used photoshop to alter a fake military ID card template or blank military ID card they found online.

Step 3: Do a Feel Test of the Card

Hold the card and feel the front and back. You should run your fingers through the edges as well. Take note of any raised spots, ridges, bumps, and irregularities. Check if there are physical alterations that can suggest tampering like overlays or glue lines. Also, try peeling the corners with your nail. A real card cannot be split or peeled back.

Step 4: Check The Information on the Card

You should compare the person giving you the card with the picture on the ID. This may sound like a “duh” step but many fake military ID holders actually count on the fact that you are too busy to inspect the ID’s details closely. If there are discrepancies, question them directly.

Most military posers do not know enough about the military, including knowledge of the pay grades and ranks. Typically, they slap the wrong information on their fake cards and give it away!

For instance, they might state 0F9 pay grade and General rank, while 0F9 is for the Major rank.

So, you just need to be a bit more attentive!

If you have a feeling the military ID card is fake, ask them to give you their signature and compare it to the one on the card.

While holding the ID, ask the person about their personal data. If they are a fake card maker, they will not be able to respond without hesitation. In addition, you can try to purposely mispronounce their name and misstate their details to see if they instinctively correct you with the right information.

Recognizing a military poser by observing their body language and behavior is possible. The typical signs to look at are:

Imposters do care about facing a fake military ID penalty, so their bodies will likely show that they are nervous or worried.

Online dating scams are other common application of fake military ID cards. In this case, the clearest red flag is if the cardholder sends you the card. It is against the law to do this, so if they try to prove to you that they are actual service members by mailing you their card, they are imposters!

Here is an example of a fake us Army ID card: 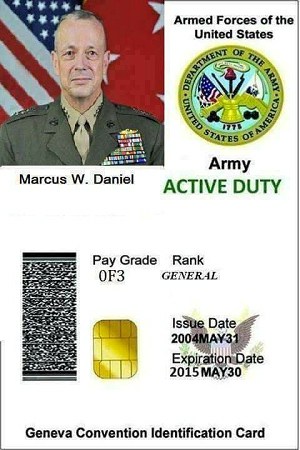 You can tell this is an Army fake military ID card because OF3 is the pay grade for a Major (MAJ) rank and not General.

If you search, military ID cards online you will find many versions of military cards, including fake retired military ID cards and fake veterans ID cards. Hence, it will be difficult to distinguish between a real and a fake one.

Now, you know how to spot a fake military ID card. We have simplified the process to just five steps so we hope that you can easily apply what you have read. If you have other tips, share them in the comments to help other readers!